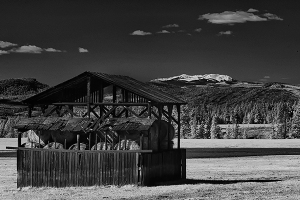 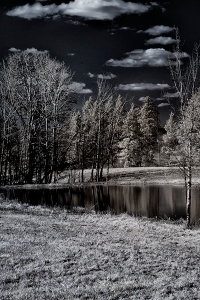 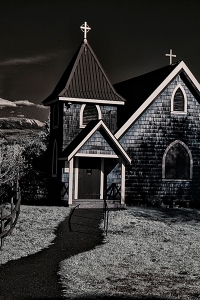 Sometimes it is necessary for me to get away from doing the usual things. My time as a photographer is spent being precise. I meter for the light and shadow, striving for the best possible exposure, and not much is left to chance.

On the Easter weekend I spent a day photographing a family Christening. My job was to take a creative approach to photographing that religious occasion and telling the family’s story. At an event such as a Christening nothing waits for the photographer and there is no time to correct omissions or mistakes.

The main rule for me was to keep out of everyone’s way, not to become a focal point of attention, and never to miss any thing that happens.

The next morning as I sat at my computer working on the post-production photo editing of the Christening my wife mentioned she would like to finish off the roll of film she had been saving for a sunny day. It didn’t take much convincing to ignore the day’s “to do” list and as I looked out at the clear blue sky I realized I needed something to take off the stress I had been feeling.

There is nothing quite like infrared photography. It is always an exploration when I use the well-worn Nikon D100 that I had modified many years ago to only “see” infrared light.

Vegetation appears white or near white. Black surfaces can appear gray or almost white depending on the angle of reflected light, and if photographed from the right direction the sky becomes black. The bluer the sky, the more the chance there is for an unworldly, surreal effect. And white surfaces can glow with a brightness that illuminates the sky.

I have written about infrared before, but for those that are new to this subject here is the gist of it.

Digital camera sensors are as sensitive to infrared light as to visible light. In order to stop infrared light from contaminating images manufacturers place what they call “a hot filter” in front of the sensor to block the infrared part of the spectrum and still allow the visible light to pass through. My infrared modified D100 has had that filter removed and replaced with a custom filter that allows for infrared only.

My wife wanted to visit a marshy area not far from our home that on wet years fills up with water, and is annually visited by birds, ducks, and geese. But this year’s early dry spring has not given the marsh much water, and when I walked up to the dam two ducks quacked loudly and flew away, and that was the only wildlife sighting for the day.

The back roads always have something to photograph, so we moved on and chose our subjects depending on the light. Linda was shooting with her old medium format 1950’s Ikoflex and was looking for interesting features like fallen trees and rock formations. That particular old film camera doesn’t have an automatic mode, or an in camera meter and requires a hand held light meter. I am sure the few passers by wondered at a woman standing roadside with a boxy thing hanging from her neck while she peered at something in her outstretched hand.

I just explored, and unlike Linda’s limited, 12 exposure roll of film, I had an almost endless supply of digital choice, and besides, infrared changes the way we see things. So I pointed my camera at anything that caught my eye.

I began this discussion with the words, “I spend my time being precise.” And “Not much is left to chance.” However, not so much with infrared. I only use the meter as a not-so-precise guide, and don’t worry about much else. I do try for interesting angles of the subjects I photograph, but sometimes I am in for a surprise when I bring the images up on my monitor.

Shooting infrared is always an exploration, a discovery and moves a photographer far from the usual.

I look forward to all comments. Thanks, John 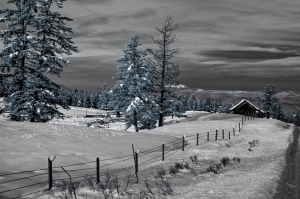 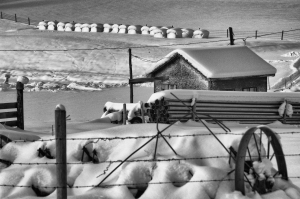 Photographers always tell me that they are participating on some kind of photo challenge or another: a photograph-a-day for a year, or once-a-month for some specific time, or some have even decided to follow a particular subject through each season. I like the idea, however, I expect dedicating time to making a photograph every day (unless one works in a busy studio and is doing it as part of the work day) could become quite a chore.

Personally, I have tried projects that require that kind of stick-to-it dedication, but I get side tracked easily and rarely complete what I started. Last February I thought I might photograph a bridge a month. I live near a big river so how hard could that be? I did get a few and then I just forgot.

I was lazy, reading and thinking about how I should have a photo project. OK, the project: drive up the road a couple miles and photograph neighbour’s places poking out of the snow and do it with my infrared camera which is fun.  Criteria: Hope for some sun.

I have an older digital SLR camera (Nikon D100) that has been modified to only see infrared light. Infrared (IR) light is light that has longer wavelengths on the red edge of the spectrum and is invisible to human eyes.

The sensors for digital cameras are sensitive to more than just the visible light spectrum. This causes problems with colour balance, so camera manufacturers place a filter in front of the sensor that blocks the infrared part of the spectrum that only allows visible light, and not infrared, to pass through. The modification for my D100 was accomplished by removing that filter, and installing one instead that blocks visible light, allowing mostly infrared light to reach the camera’s sensor.

The camera still functions normally with full autofocus and autoexposure, except that it’s now able to record the infrared wavelengths that are just beyond what the human eye is capable of seeing.  When infrared photographs are produced as black and white the photographs show trees with glowing white leaves and black skies opening up new visual opportunities for photographing the world around us.

Many think of infrared photography as the stuff of military night reconnaissance, or, as frequently portrayed in movies, as aerial thermal imaging that finds the bad guys. With thermal imaging one sees the heat the subject is producing, however, infrared as photographers use it, with our modified cameras, is about capturing the light or radiation that is reflected off a subject and doesn’t involve thermal imaging at all.

In 1800 Sir Frederick William Hershel described the relationship between heat and light and let the world know about the existence of infrared light in the electromagnetic spectrum.

I don’t know how conversions are accomplished with modern sensors. With my old D100 I need to preset the white balance and be aware of a meter that is easily tricked with the white snow. I must check my camera histogram after every release of the shutter and usually make two or three exposures just in case. However, everything appears normal through the camera’s viewfinder.  Also, because so much light reaches the sensor one can use high shutter speeds and so it is easy to hand hold while exposing a photograph.

I would have liked a clear sky with more sun to increase the infrared effect, but the high clouds let in just enough light to make things interesting and challenging. Some subjects don’t work very well with infrared, so I just experiment, take lots of pictures and hope for the best. I knew on that not-so-bright-day my images would take some work with PhotoShop and NIK’s SilverEfex.

Infrared photography is fun. I was only out wandering my neighborhood for a little over an hour before I hurried home to work on what I got. Everything changes when one is working with infrared, forcing even the least creative among us to think creatively. I can leave my images with blue trees the LCD displays or move the white balance off the preset to cloudy and get red and black pictures instead. Opening an image file in PhotoShop is always a bit of a surprise and from there on its all experimenting and personal vision. Yes, infrared is fun.