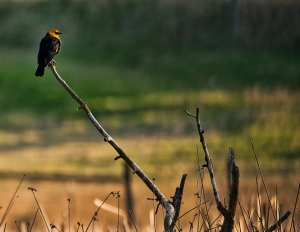 I had been wondering how the pond up the road from my home was changing since my visit was only two weeks ago when the geese and ducks were wandering around on a thin layer of ice.

At that time the surrounding fields were beginning to turn green and the pond inhabitants seemed ready for spring. On that visit, other than a noisy goose on hill warning everyone of my presence, the pond was quiet.

This time I had checked my Honda’s manual and there wasn’t a stealth mode. But I suspected the geese would be hidden away nesting and doubted there would be any birds at all to photograph.

As I stopped at the pond and rolled down my window I was bombarded by a cacophony of sound. The sounds were not so much a warning as a celebration.

I pulled the car around and stopped at a high flat spot on the road so I would be out of danger from country drivers more intent on getting home along the winding road than watching for a parked car.

Although I had my camera and lens ready I just sat for a while listening to the discordant music of that country pond. There must have been hundreds of singing birds hidden out of sight.

As for the geese, I could see a few searching heads in the distance and there was only one big fellow guarding by the fence line.

The sun was low and the pond was reflecting colors that ducks swam through.

Not wanting to return with an empty memory card I took the opportunity to photograph two geese I spotted huddled close by and a bird or two perched on lifeless reeds still poking out along the pond’s edge.

I could have sat there till dark enjoying the evening concert, but I decided to head home, driving slowly in hopes of seeing other subject in the fading light.

I’ll return in a week or two just to keep up with the changes. There won’t be goslings or ducklings for me to photograph for about 30 days, but I the pond is only a short drive from my home, and I am sure there will be lots of “spring” opportunities to photograph as I wait.

I headed to Vancouver this past weekend with my camera. The substantial change of scenery was invigorating. I went with 3 friends and took the chance to wander the coast for some late afternoon. Ahh….the exciting life of a photographer. 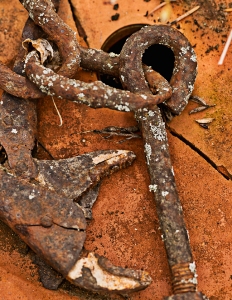 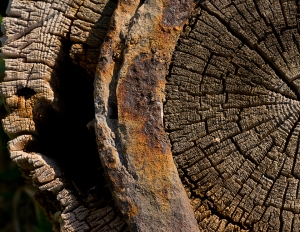 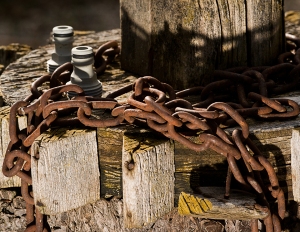 I have to admit that almost anything out of place intrigues me. A crushed pot, or single shoe laying along the road, a bolt or nail talking up space on the sidewalk as I walk to the coffee shop, even an elastic hair band partially hidden in the dirt where I park my car deserves my attention.

No, I am not a collector. Nevertheless strange pieces of metal, rusty pliers, discarded horse shoes, a worn out film projector from the 1960s and even an old window with peeling paint somehow were able to find their way into my garden. I guess I like the contrasting effect.

Sure there are lots of bushes, flowers, trees and grass growing around my house, but to me it just feels right to stick something on a rock or stump that might seem out of place to most people.

For someone like me that likes to photograph pretty much anything, having random stuff is darn fun.

I try to photograph my garden every season of the year. Rain, snow, wind or hot sun, doesn’t deter me. I just put a macro lens on my camera, grab a flash and start wandering to see what presents itself.

My yard is “budding” everywhere and I had decided I should wait a bit longer for the growth to get more interesting. Nevertheless, when I went out on my porch to throw a rock at a woodpecker intent on pecking a hole along the edge of my roof, I looked around and decided to get my camera and see what I could find.

If not plants then what? Well, I chose to photograph anything in my yard that wasn’t living. Sure there was a few raindrops, but I had my handkerchief to wipe any accumulated water off my flash and camera. And with no shortage of subjects all I had to do was choose interesting angles for my photographs.

“Photography is about finding out what can happen in the frame. When you put four edges around some facts, you change those facts.”– Garry Winogrand.

I am sure Gary Winogrand, the famous and influential street photographer, was speaking about highlighting social issues when he said that.

But I like his words and I’ll think of them when I discuss the personal way of seeing one has when photographing a subject close-up. I think many of the images we photographers with our modern data gathering cameras make do in fact “change” when we place four edges around them in post-production.

Photographing the found objects in my yard forces me to look beyond a traditional plant filled spring garden. The subjects I saw were changed by the distance the camera was from them and then again by my final framing.

The growing spring garden will wait a few more days. I am sure I will have a lot more to photograph. 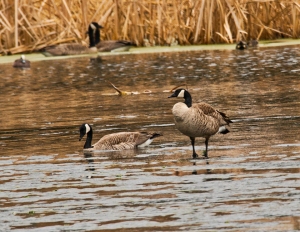 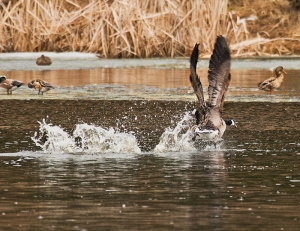 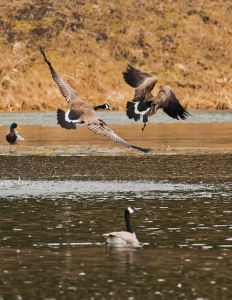 The ice has been melting along the river all week long and I wondered if the pond up on Duck Range had melted enough for the geese to return.

The days have been warm, but the nights were staying at freezing or near freezing. However, in spite of the day’s constant drizzle of cool rain I was curious to see if there were geese on the pond and if there were any goslings yet.

I suspected I was early, but grabbed my camera, put the ISO up to 800, then mounted my 150-600mm on it, tossed the beanbag on the front seat of my car and headed out up the road to see.

I slowed down just before getting to the pond and rolled my window down. Hmmm, there is a hint that I am from a past generation. I haven’t seen a car that one must actually turn a crank to “roll down” a window in years. Anyway I pressed the switch and the window slowly and quietly sank out of sight.

I drove very slow hoping I wouldn’t disturb the geese. Ha, fat chance! From the rise above the pond there began a loud racket of honking sound. There went my attempt at sneaking up on the anything near that pond. I’ll have to check my Honda’s manual to see if there is a stealth mode.

The pond was filled with ducks and geese, but no ducklings or goslings yet.

I photographed the three sentinels before they could find cover. Then drove past and turned around so I could stop and shoot from the cover of my car.

Much of the pond still had a smooth cover of ice and there were more than one kind of duck paddling along the edge or just standing enjoying the slight drizzle that had been going all day.

I photographed the ducks and what geese I could see on the pond and tried to get some good photos of the geese that noisily flew off.   I didn’t do badly, but I think some of the avid bird photographers I know in Kamloops would have been better prepared than I was when the pond exploded with splashing water and flapping feathers.

I stayed for a while and the pond calmed down and became quiet giving me at least a chance to photograph the ducks and geese that finally decided to ignore me.

Those that read my articles about trying to photograph the pond’s geese last year will remember my disappointment because they were nesting and feeding on the opposite side of the hill. This was my first trip to the pond to photograph the geese and I am determined to get some good shots this year and plan on a weekly visit.

I left the beanbag in my car just in case. 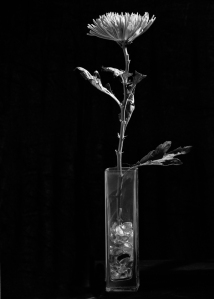 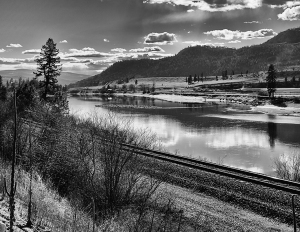 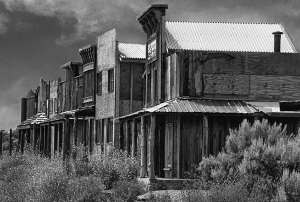 Spring is on the way and with it is blossoming colour.

Only a week ago the walk from the driveway to my home was frozen with snow still clinging to the rocks that hold the garden back. However, yesterday morning the walk was almost dry with grass beginning to frame the border.

One would think that the talk from photographers stopping by my shop would be about spring colours. Ahh…but there was not even a word about how nice it would be to photograph all that springing colour.

The first phone call of the morning was from a frustrated student that needed to complete an assignment asking me if I sold Ilford black and white film. I don’t.

A bit later a fellow I hadn’t seen for a while stopped to say hello and we talked about shooting infrared. He was hoping I could help him find an infrared camera.

I had just this past week missed out on a good deal on a converted camera, but the spring used camera sale will be at the end of next month in Vancouver and I suggested he join me there.

That conversation continued when he showed me some black and white infrared photographs that he had found online.

Later that afternoon my friend Drew showed up just as another photographer and I were admiring some of the excellent images made by members of a Facebook black and white photography group.

The three of us looked at pictures and talked about B&W until closing time.

One would think with the ease that modern DSLRs make colourful photographs that there would be little serious interest in black and white. After all, to make a good B&W image one should use some kind of editing program that allows adjustment of the different colour tonality.

I am sure the numbers of photographers that actually produce B&W are few compared to colour, but there are many avid groups on Facebook and Flickr that are dedicated to what has become to be called “monochrome” photography.

I pick and choose which of my images gets converted. Sometimes the subject deserves to be shown as B&W. And when I mentioned to my close friend and photo-partner, Jo McAvany that I was going to write about black and white she insisted that I stop by to get a B&W photo of the river she had taken earlier in the day.

I still remember the time when colour was almost non-existent. Once in a while someone would have the money and shoot a roll of colour, but most of the families in the neighbourhood I grew up in only could afford black and white film. Some people didn’t like colour pictures. I remember my aunt critically looking at some pictures at a family gathering that they “just didn’t look natural”. And as I have written before, when I first got into photography I preferred B&W.

I strongly believe a successful black and white photograph depends on its ability to communicate. It doesn’t depend on eye-catching colours for its’ visual presentation. Those B&W images that stand out combine attention to light, shadow, composition and perspective.

I think that black and white photography is far from being left behind, and in my opinion, with the current processing software, updates in high quality printers, and printing papers black and white image-making will continue to be an option for many serious photographers.