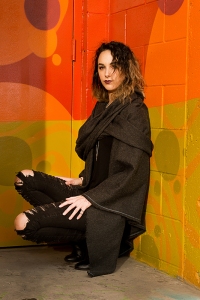 This past week my friend Jo McAvany asked me if I would be willing to help her with using off-camera flash in daylight. I like controlled studio lighting, but I’ll admit that balancing flash lighting in the bright daylight is much more fun.

She texted me saying she had asked her friend Heather to be our subject. My question was “where do you want to do this”. I think I held my breath at that moment hoping she wouldn’t suggest wandering around in the woods to photograph our young model. If she had I probably would have feigned an attack of the flu or something just to get out of spending a boring day doing what every beginning photographer seems to be doing now days. However, Jo said, “I’d like to go downtown.”   My response was, “Great lets pose your friend in the alleys”.

I am not sure if it was because of the shopkeepers or random artists, but the alleyways in downtown Kamloops are damn colourful. There are murals, wildly painted back entrances and large brightly coloured signs that fill complete walls. One might expect to find trash, discarded store goods and rusting garbage bins. But nope, it was as if someone had said, “Hey, there might be a photographer or two that want photograph our alleys so lets make ‘em nice.”

We went from coloured wall to coloured wall, posing our ever-patient subject in doorways, against brightly decorated enclosures and behind fenced walkways. I think this was Heather’s first time posing for photographers, or at least having two cameras pointed at her. And yes, she had to endure my constant discourse about balancing light, shadows, exposure and off-camera flash.

Sunday was a good choice. Other than the cold breezy November day, it was quite pleasant. Well, except when the wind caught the umbrella that was attached to the flash and stand and sent everything crashing to the ground.

There was no traffic zooming down the ally and other than some fellows sitting out of the wind behind a building and a street cleaning machine quickly scrubbing by, we had the alley to ourselves.

The three of us ambled up and down the alleys. There were so many places that demanded Heather to pose for us in front of. We even tried adding her into one of the large murals that looked like a walkway into an Italian villa. There was a small green door that someone had painted, and both Jo and Heather agreed that it would be like Alice in Wonderland if Heather reached down for the doorknob. We could have spent the day wandering the alleys photographing Heather, but eventually the cold crept in and we decided it was time to finish photo session talking and warming up at a coffee shop.

We had a good day. We discovered a new place where we can do photography and we all worked together to produce some interesting photographs.  Heather is leaving town for a job in the fast paced coastal city of Vancouver, and our photos will surely give her some great memories of the city she has been living in for some time now.

I think Jo and I might invite a few photographers and models to join us another time to do a bit more exploring around the back alleys.

The morning news said to expect snow, overcast days and cold weather. So I decided I had better take a last visit Wells Gray Provincial Park with out the snow. I had been lazily putting off spending a day in that scenic park. Gosh, it’s only a two and a half hour drive to get there, and I am not that busy, so I couldn’t come up with an excuse not to throw my camera gear in the car and make the drive.

I first visited Wells Gray back in 1971. A friend and I had driven up the east coast of the US into Canada, traveled around Cape Breton, and then had a leisurely drove across Canada to Kamloops, British Columbia. Someone we met in Kamloops suggested Wells Gray Park.

I remember driving along the rough, rutted dirt road into the park and marvelling at the quiet wilderness encroaching from both sides. Until the road became blocked by many stern looking women carrying placards and standing by a big sign demanding that the road should be paved.  When we stopped someone thrust a petition through the window, while telling how the school bus had driven off the dangerous road we were on, and required our signatures. I am sure they saw the California plates on the front of our 60s Ford Econoline van, but they didn’t seem to care so we quickly signed their petition and were allowed to carry on.

I smiled remembering that as I drove on the pleasant road that had been freshly paved, yet again, and slowed down to look at the Black Horse Saloon and guest cabins that now sits where those women were. I guess they got their way!

The park was empty. There were no cars or tourist filled busses on the roadside. Gosh, I felt special.

I have my favourite stops for when I don’t feel like hiking. There is an old abandoned building on the way into the park that I have been photographing for years. I am always surprised to see it still standing.

My second stop is to climb under the bridge that crosses the Murtle River. Going under the bridge gives a better location to photograph the “Mushbowl” and the large smooth rock surface is filled with big, round, deep holes. It’s a fun place to wander.

Then I made a fast drive to Helmcken Falls. Not so much because I really was in a hurry to get there, but because I had finished three cups of coffee and really needed to get to an outhouse. I got there and rushed to the privy only to find that the door had been unceremoniously pried open and the toilet paper had been shredded off it’s wall hanger. My friend Jo had mentioned that I should watch for bears, but if she does ask me I’ll just tell her that I am sure a large squirrel ripped up the toilet paper and the door was off its hinges because someone else (with long fingernails) that also too much coffee must have been in a hurry.

Helmcken fall was, as usual, in the shadow, but there was a nice fog and the sky had some clouds. Not that bad for photography. I like to wander away from the viewing platform, down past the end of the security fence, and just past the sign that warns hikers that they can fall over the edge of the canyon. That’s best because there is no fence to block my view.

Then it’s only a short drive to my favourite place, Bailey’s Chute. As with the bridge, I climb down under the viewing platform.   My final spot is to park beside Shadow Lake. I like Shadow Lake because sometimes one can see a snow capped mountain to photograph in the distance.

Usually it’s hard to find and empty table at the end of Clearwater Lake to eat lunch at, but the park was empty.

My day couldn’t have been better. Although I have photographed that scenic park many times in the last forty plus years, I always enjoy the drive and the photography. And I am sure I have a good ten or maybe more years left in these old bones to be back photographing that park many, many more times.