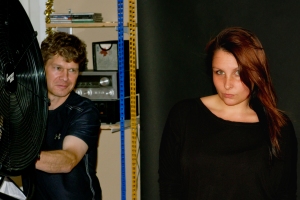 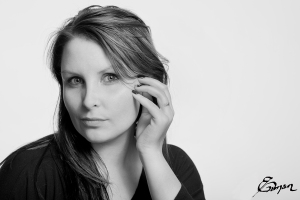 French poet and art critic Charles Baudelaire once said, “A portrait! What could be more simple and more complex, more obvious and more profound?”

Last weekend I led an interactive studio session with students that covered off-camera lighting for portrait photography. My goal was to leave participants with enough knowledge and skills, that with additional practice and experimentation, they would be able to produce pleasing and creative portraits of friends, family, and clients.

Learning to take better portraits, or as I emphasized in my workshop, portraits that flatter the subject and which shouldn’t just be a flat documentary of a person, involves understanding lighting techniques and posing.

In this one-day course participants experienced several aspects of portraiture including directing both male and female subjects, as well as an introduction to light modifiers and their application.

My teaching experience has now expanded to over three decades. That experience has taught me (yep, I have learned lots too) that, rather than acting like a star or celebrity standing on a stage demonstrating what I know, I can be much more effective standing by their side leading photographers as a participant into new territory.

My job was to present information on the subject at hand and keeping things going. I’ll admit that wasn’t hard with last Sunday’s group. I stood back and could see what progressed from a spark to a wildfire as each photographer started getting the concepts and began excitedly making the kind of portraits future clients would definitely pay for.

Building bridges between what those photographers already knew and what had eluded them regarding portrait lighting was fun for them and, of course, for me and I enjoyed their enlivened interaction and creativity.

As with most of my current workshops this was held in a well-equipped studio filled with an assortment of lighting gear, complete with a drawer full of wireless senders for participants to use. There are soft boxes, umbrellas, diffusion screens, reflectors and a great selection of wall-mounted backdrops.

All equipment and setups I employed for this workshop could easily be added to any photographer’s kit without a large outlay of cash and could be used in a basement studio.

As the day progressed I included an assignment for participants to make a “business” style portrait of each other. That added to the fun and gave our overworked model some respite. My intention was to get photographers thinking about being creative and complimentary in their directing, posing and lighting.

Our model came made-up and ready to be photographed, whereas the rest of us, well, we intended to be behind the camera, not in front of it. So this was a perfect way to get photographers thinking about how that not so willing portrait client might feel.

By now regular readers know that I really like quotes. So I’ll end with this one by photographer Henri Cartier-Bresson that fits the mindset I hoped to impress on participants. He said, “Photography is not like painting. There is a creative fraction of a second when you are taking a picture. Your eye must see a composition or an expression that life offers itself to you, and you must know with intuition when to click the camera. That is the moment the photographer is creative.”

I always enjoy and respond to comments. Thanks, John

My life with Peaches (sometimes referred to as that damn cat) started a little over fifteen years ago when she moved into the hay shed one cool fall day.

We would get cats living there from time to time, and I bought cat food and would feed them when I fed our horses. Here in the wooded hills where I live it is pretty common to find cats that heartless humans from nearby towns have pushed out of their cars along the road with the misguided belief that domestic cats will survive the wilderness.

I don’t know how but that little mess of calico fur made it to our shed, and survived the raccoons, hawks, owls, coyotes, bobcats, other cats, and neighborhood dogs that all prey on helpless cats that only knew the comfort of some home until they were coldly discarded.

Peaches got her name when I told my wife I was feeding four cats. She came out and asked me if I had named them; I pointed to the black long hair and said “Furry”. The grey and black-striped cat I named “Furry”. The orange I called “Furry”. And pointing at the calico long hair, I finished with “Furry”.

That worked fine for me, and the cats only cared about the occasional rub on their head and food anyway. My wife was not having that, named them on the spot and told me to call them by their names. I promised to do that, but mostly I just whistled at them. I expect they liked being named by that unknown person that cuddled and talked softly to them, but seeing me meant food.

An owl got the furry black that got to be called Miss Furry. The neighbour’s had a town friend who came out with his dog who promptly killed the orange cat named Earless, so named because her ears had been frostbitten down to short little stubs. After the neighbours moved away, the striped cat she named Trixie, moved into the new people’s garage and was eventually taken in. Finally she called the calico cat Peaches.

One very cold snow covered morning I discovered that longhaired, calico cat almost lifeless after what might have been a struggle with a coyote and brought it into the house to mend. Peaches became our house cat and with a single-mindedness that I later was forced to tolerate, became to be my wife’s lap cat.

Peaches also filled an important role in our household as my ever-present photography subject. Is there a better poser than a cat? I had dogs for years. Sure, dogs will do anything to please and I constantly photographed them, but dogs get bored easily and unless they were tired would move. If you photograph your dog be prepared to continually wipe the drool off your camera. But a cat, the consummate poser, will hold one position without moving for a long time.

Peaches didn’t mind waiting for multiple light setups, close-ups, or even an occasional repositioning. She would just sit there, soft orange-ish fur glowing in the light, and look at me waiting for the next release of the shutter.

What could be better for a portrait photographer than to have an ever present and willing subject? And her modeling fees were reasonable.

I don’t know how old that cat was when she wandered, cold and hungry, into our barn fifteen years ago. She certainly wasn’t a youngster. This last year she had been getting old fast like the rest of us, and this week, after a couple visits to the vet for medicine that was of little use to curb her failing health, Peaches died.

My wife, of course, will miss that cat purring on her lap and I am going to miss my ever-willing photography partner.