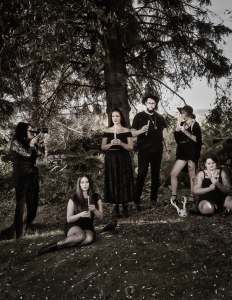 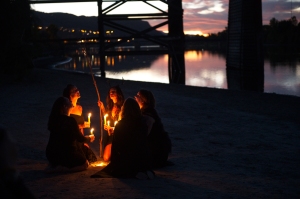 October is the month of witches and ghosts and all things spooky. So when my friend Jo McAvany showed me a photo of a witch posing in the woods and said, “I want to do something like that, but with lots of witches” my enthusiastic reply was “great, what can I do to help”.

Jo started texting her friends asking them to wear spooky makeup and get black outfits that would fit the witchy theme and we made plans for where and how the photograph should be made.

Jo’s idea was to have a coven type scene and thought that including one male amongst the witches would be a good idea.

That would be closest to the writings of Margaret Murray in her 1921 work, “The Witch Cult in Western Europe”. According to her a coven consists of twelve witches and a devil as leader. A Coven is a group in which witches gather.

We didn’t get our twelve witches, but Jo was happy that there were eight women were willing to get dressed in black and make time to be photographed as witches.

I brought speedlights on stands and Jo had a flash trigger on her camera. We originally had the idea to place one flash behind, but one flash wasn’t enough to illuminate everyone so we decided to use only two lights form the front. One placed was off to the side and another directly behind Jo with her camera. However, with many of the shots Jo just cranked the ISO and shot with the fading natural light.

For the later after dark photos where the only light was coming from witches holding candles we didn’t use a flash at all.

I mostly was moving the lights around and making sure they were connecting to the sender. I also wanted to take a few photographs of the participants getting ready and of Jo taking the group photos.

I did take some after dark photos of the witches holding candles on the beach. I used my 24-70mm.

Jo invited another photographer, Bob Clark, to join us.  Bob showed up just as we were finishing, grabbed a light stand, put his flash on it, and whisked some witches off into the dark treed area to take pictures.

The photo session was defiantly a success with some good photos for all the participants to have. Everyone had worked hard to make the witchy Halloween theme.

I am thinking the group photo might make a good Halloween greeting card. Greeting card? Sure, send a friend a card that says, “Have a happy Halloween”.

Next time I want to use a lot more flashes and maybe have coloured gels. I might set some flashes out in my yard next week and try some lighting ideas. Now if I can just find a tiny witches hat and get one of my chickens to sit still while wearing it. 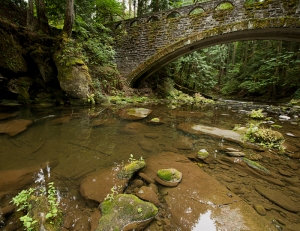 When most of us that live in British Columbia think of Bellingham Washington it’s usually about the shopping. Bellingham is the closest major US city that we can drive to for better prices on just about everything. Filling up our cars, buying clothing, food and dairy products to name a few items are still less expensive than here in Canada.

Some years ago I stopped overnight on my way back from my annual sojourn to the Anacortes Shipwreck festival and while out to supper I noticed a flyer with the words “Things to do in Bellingham”. Browsing through I noticed it mentioned a place called Whatcom Falls Park.

There are lots of waterfalls in British Columbia so that shouldn’t have been a big deal. However, what grabbed my attention was a picture of a stone bridge with a waterfall behind it. I have always been intrigued with the many stone structures built in the 1930s by the WPA (Work Projects Administration). I remember my father pointing out stone bridges and walls along mountain highways and talking about how the government employed men needing work during the Great Depression.

I have wanted to go back to Bellingham for an overnighter so I could have plenty of time to photograph that wonderful stone bridge and the park’s waterfalls. When I mentioned to my friend Jo that I wanted to go there this summer her excited response “Lets go” was all I needed.

I booked two nights at a hotel that included breakfast and we headed off to cross the border to Bellingham to photograph Whatcom Park and the city’s waterfront.

We had a lazy morning and arrived around 9:30 to an almost empty park and were so excited that we ran down the wide dirt walkway to the bridge. Gosh, what a beautiful place.

The park was only a fifteen-minute drive from our hotel and we were surprised to find that the stone bridge and falls that were only a couple minutes walk from the parking lot.

We photographed from the bridge then climbed down the well-worn trails under the bridge so we could take photographs at the base of the falls.

Creatively photographing waterfalls is pretty easy and the long exposures that are popular with water are no big deal.   All one needs is a good camera, a sturdy tripod, and some ND filters. I shot with my trusty 24-70mm and Jo used both a 28-300mm and 14-24mm.

There were two waterfalls, the large and impressive one near the stone bridge and a smaller more intimate one just up the creek a bit. We photographed both of them trying different exposures and filters.

My favourites are square filters that I hold in front of the lens as I make the time exposure. I prefer to hold the filter and slightly shake it up and down so any marks on them won’t be visible.

We stayed at the park way past noon and sat in my car talking for a while before leaving to check out the coast.

What a fun way to spend a weekend.

The best word I could use to describe how that colourful park seemed is “magical”.

I didn’t want to disturb anything and even though there were sounds of happy people coming from all around, everything became quiet when I looked through my camera.

I found this quote by American photographer Diane Arbus that perfectly describes the way Jo and I felt as we each pushed the shutter.