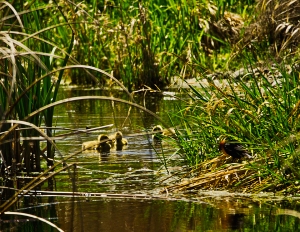 I am getting frustrated. I visited Fallis pond yesterday afternoon for another attempt at photographing the geese.

I know there are lots of geese because I can see their wily heads peaking over the hills above the pond before they quickly and stealthily disappear from sight.

This time I asked my friend Jo McAvany to go with me. Her eyes are 40 years younger than mine and I had hopes that she would see geese that I could not.

She had my Tamron 150-600mm lens mounted on her Nikon and I was trying a Sigma 150-500mm that had just come into my shop. I figured there’d be a better chance to get some photographs with two of us.

My friend Ken Tiessen says about geese, “they don’t like us” and I guess he may be right when it comes to those that nest along that pond.

We slowly drove my Honda beside the pond. It was quiet except for a few ducks playfully splashing along the far shore and there were pleasant welcoming sounds from a few Yellow-Headed black birds perched in the reeds. But no warnings or welcomes from the geese.

Both Jo and I had our super zooms at f/8 and we upped our ISO so we could follow that old photographer’s telephoto lens rule that says, “Match your shutterspeed with the longest focal length of your lens”. Jo was crouched in the passenger seat using a beanbag on the window to rest her lens. And I would slowly sneak out and hide behind the car and shoot over the roof.

As I read what I just wrote I am thinking we were absolutely ready to get some great shots. Ahh…but here is the rub. The geese have to cooperate and actually let us take their photographs.

We waited and watched. Then suddenly Jo spotted two adults with some goslings swimming just behind some reeds on the far side. (I knew I could depend on her young eyes) Those geese were partially hidden, but we pointed our cameras in their direction and released our camera’s shutters anyway.

Finally, they came out for a swim as if there was nothing in the world to bother them. They paraded on the pond for a short distance and then were again hidden by the thick pond reeds. But we got some photos. Not many, but some.

To finish the evening we each took a few pictures of the ducks and birds on and around the pond, then headed home to load out images on our computers.

Jo stopped at my place on her way home and we celebrated our limited success with a glass of wine while listening to the Bee Gees on my CD player.

Ok, that was not such a big deal. But I like wine and I like the Bee Gees, and we each got a couple good photos.

In my opinion it doesn’t get much better than that.

8 responses to “A continuing quest to photograph the geese hiding at Fallis pond.        ”