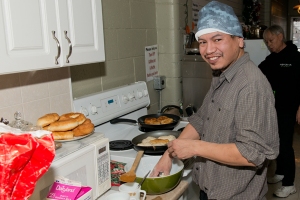 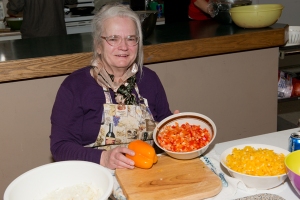 This Christmas I volunteered to be a helper and photographer for a neighbourhood community friendship group.

Each year Dale Northcott, owner operator of Northcott’s New and Used, joins other local help organizations to put on a Christmas Meal for anyone in Kamloops that would like a big home cooked meal during Christmas.  This year Northcott asked me if I would take a few pictures of the event.

For those that might wonder about photographing a large room full of people, I’ll remind them that I use flash. I always have a flash attached to my camera when I photograph people close up, indoors or out. However, I never use the ineffective little pop-up flash that is part of the most modern digital cameras and I also don’t just slide a flash on the hotshoe.

I have never liked that bright directional light created by being inches away from the center of the lens. It is harsh and unflattering. The best would be to carry an off-camera flash mounted on a stand, but in crowded circumstances that doesn’t work very well. So the next choice is to have the flash mounted on a bracket that puts the flash up and off camera at least four or five inches.

That flash bracket is my choice. Most of the time it puts the subject’s shadow down and behind them and its slight distance from the lens makes a more flattering light. My Nikon flash comes with a frosted diffusion cup fitted over the flash head that modifies and softens the harsh, direct light of the flash.

I always test my location and try for a balanced light. Fortunately, in this location I was able to adjust the room lights to get plenty of ambient light bouncing off the walls and the ceiling so I wouldn’t get that “deer-in-the-headlights” effect.

I think sometimes photos are of the organizers and volunteers get overlooked, and those were the people I approached as soon as I got to the hall. I am not one of those that nervously says, “Hi my name is so and so, can I please take your picture”?  I walk right up to the person and start talking as if we’ve always been friends. I rarely have to ask questions, because my new friends usually tell me about themselves, their organization and how important the event is. Then all I have to say is, “I gotta get a picture of you, hey grab that bowl or how about you wash some dishes…this is going to be a great picture.” And in this case I also said, “ I’ll be giving the pictures to Dale Northcott so you can get one.”

There was another photographer that knew many of the people sitting down to eat and I let him take their pictures. As I was about to leave he commented that one person asked him to delete their picture. I said, “and of course you did”, and he smiled and said, “yes I did”.

It was a fun event to attend, I liked taking pictures of the volunteers and organizers, and I got in great conversations with people that finished eating. My favourite comment was “did you get enough to eat” and “can I get you more”?

I know there are those that seem to believe their cameras are too valuable to be used for free, and the photographs they make are also too valuable to be given away. In the forty plus years I earned a living in this exciting medium of photography, I have never been one of those people.

My best wishes to readers on this festive season. And I hope everyone has a Happy New Year.