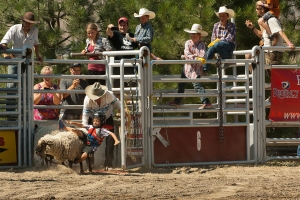 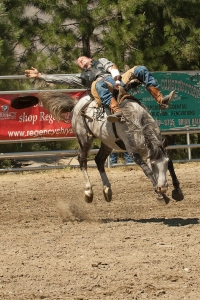 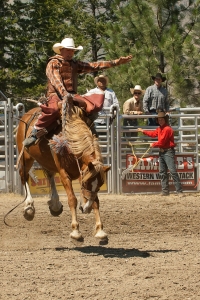 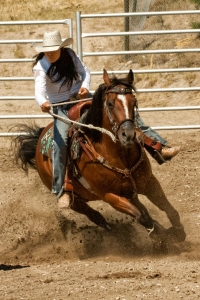 Every year I look forward to spending a dusty, fun-filled day pointing my camera lens thru the arena rails at the Pritchard Rodeo in Pritchard, British Columbia Canada.

My wife dropped me off and I walked down the dirt road to the arena. Events had already begun, and as I looked around at lots of familiar faces I spotted Karl Pollak, his Nikon cradled in one arm waving at me. Karl had driven four hours that morning from the large metropolis of Vancouver to attend our small rural community rodeo.

He had brought another photographer, Meko Walker, and this was her first time at a rodeo. As we were introduced, happy as I was to see Karl, meet Meko, and shoot with the two of them, I wondered how these photographers from the moderate humid climate of a coastal city were going to cope with the sunny, cloudless, windless, extremely dry, 40 degree Celsius day.

There was a lull in the action as we talked and the Pritchard fire department’s water truck drove around the arena spraying water. We moved aside continuing our conversation (protecting our cameras from the water), but two young girls ran rail side laughing as they danced around in the wet, cooling spray.

While we waited, sitting on the edge of the hill that ran down from the bandstand, I asked Karl why he would come all the way when there were other rodeos closer to Vancouver. He replied, “I like the wild location. Look at the hills, and trees, and all the open space.” And after snapping a wide angle shot of the arena the added, everyone is so friendly, they say hello even though they don’t know me, and there is a beer garden with people drinking, but no one is getting drunk, being loud, or causing trouble.”

The Pritchard Rodeo grounds are perfect for photographers. The arena is enclosed with a strong metal fence that’s safe to stand close to and doesn’t restrict the view. Of course, one has to be careful when excited horses are getting ready for the Barrel Race, but heck, it is a rodeo and one must remember that the animals, like any other athletes, are focusing on what they are about to do, not some silly person with a camera.

I like that rodeo, and as I wrote, every year I look forward to photographing it. I like capturing things that move fast, it challenges me to think and I enjoy the test of wills between animals and riders. Photographing any action event is fun, and one can be sure there will be action at a rodeo.

This year they added children’s sheep riding. I don’t know who is more bewildered, the poor kids being coaxed along by their parents, or the sheep trying to figure out why there is something on their back and why some big human is trying to persuade them to leave the enclosure they were just herded into. When the sheep finally were cajoled to move, the young rider would usually slide off, and fall to the ground pretty quickly. After all wool is slippery.

When they beckoned Meko and I into the riding arena I was briefly worried that my 70-200mm lens would be too long, but as it was I had lots of room to move around and it was just fine.

Rodeos are easy to photograph. One just has to pay attention to where the action is coming from and take up a position that allows everything to move towards the camera.

Then choose a fast shutterspeed and start shooting. I prefer to use shutter priority; I select the shutter, and the camera chooses the aperture. All I need to do is follow the action as the camera’s computer handles the rest. Yep, it’s all pretty easy.

There should be a note saying, “No animals, cowboys, cowgirls, or photographers were hurt during the process of having a great time.”

I appreciate comments. Thanks, John

One response to “A Fun Day Photographing the Pritchard Rodeo.”