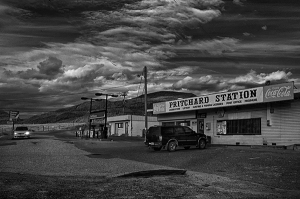 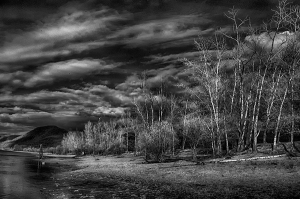 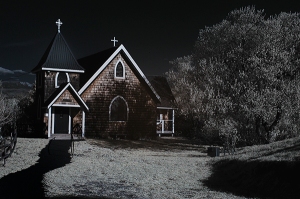 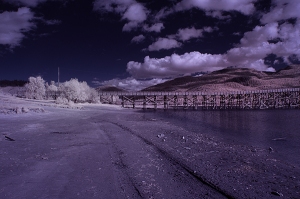 In my last article I discussed how easy it is to make creative changes in one’s photography by using a camera converted to infrared. I wrote that photographers have the option to creatively challenge themselves by selecting different lenses, choosing to produce black and white images, electing to use highly manipulative post-production techniques, etc., or any combination just to mention a few. Then I added one more creative tool to the list that I use, a camera converted to only capture images of the world around me in infrared.

Infrared allows a photographer, and gives the viewer, a completely different feeling of a subject. Making an image with a modified camera is an exploration and a discovery that moves a photographer far from the usual. I like the sometimes-surprising tones that I can obtain when I convert the image to black and white. Like any form of photography, or art, it’s all a matter of taste.

Reflected IR light produces an array of surreal effects, vegetation sometimes appears white or near white. Black surfaces can appear gray or almost white depending on the angle of reflected light, and if the sky (my favourite part of the infrared image) is photographed from the right direction it becomes black. The bluer the sky, the greater the likelihood of an unworldly effect; and white surfaces can glow with an ethereal brightness.

The response I received from readers got me thinking about how much I like shooting infrared. That’s been a long relationship. My first forays with infrared during the 1970’s were began with infrared colour transparency film and then with infrared black and white film.

Now that I have set film aside I am more than content to use a converted digital camera. Besides it’s much easier with digital than the arduous process we had to contend with when we used film. Infrared film had to be loaded and unloaded in complete darkness, then processed in metal tanks that kept the film from getting fogged. We attached a deep red filter to the lens. The deeper the red the better the effect, and because of the dark red filter things become very hard to see. Oh, and the exposures were long if the sun wasn’t bright.

In spite of that infrared photography has had a strong following of creative photographers for as long as I have been involved in photography. And now with the light gathering ability of modern sensors I think that following is stronger than ever.

In an article I wrote about using infrared film titled “Photographing a Different Kind of Light” I said, “There are those who believe a fine art photograph must represent reality, but reality doesn’t necessarily take into account that there are differences between what one sees, what the photographer’s camera produces, and what the photographer was trying to capture.” I think a photograph is only a representation of a particular vision of reality.

Infrared allows us to photograph a world illuminated by infrared light, that part of the colour spectrum we can’t normally see, and produces intriguing, exquisite and sometimes unearthly photographs that can’t be captured in any other way.