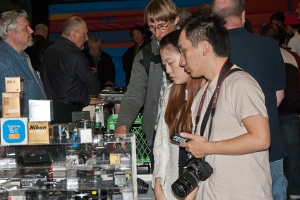 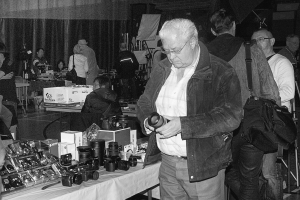 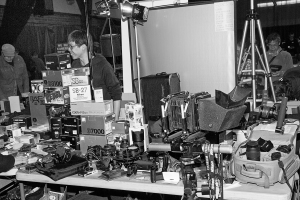 The clock on the stove signaled 7am and I heard the sound of my friend, Peter getting out of his truck in front of the house. I had my car ready as it was idling on the cold morning, and we jumped in and left for the hour-long drive to meet up with two more photographer friends, Dave and Pat at Dave’s place.

A bit over three hours later we had stopped for coffee in Merritt, driven across the scenic, mountainous and snow lined Coquihalla summit, driven through rain as we passed Hope, crossed the Fraser river into the warm coastal city of Burnaby and were parking across the street from the Cameron Recreation Center that was hosting one of my favorite events each year, The Vancouver Camera Show & Swap meet.

I will say the four of us were pretty excited. We had talked about the trip for weeks and had just driven for three hours talking about photography the whole way and now were walking into a large hall filled with photography equipment, all for sale.

Put on by the Western Canada Photographic Historic Association, and organized by Siggi and Brigitte Rohde, this long-running show has now reached its 38th show and makes the claim of being the largest in Canada with, I think, about 120 tables. And when I talked to the fellow at the door later that day, he thought well over 1,000 people had walked through the doors.

Yes, we were excited as we gazed at the crush of people. Hmm, maybe it was a congregation and we were entering some chapel filled with the faithful. Anyway, as soon as we walked in, Peter yelled, “see ya later” and headed off disappearing into the crowd and Pat and I started looking in earnest for a 60mm macro lens that he could mount on his new camera. I noticed Dave in deep discussion with a couple of photographers he had just met at a table packed with Canon gear.

The event was, as usual, well attended with all types of photographers from all walks of life. Photography, after all, is enjoyed and practiced by men and women of all ages and all cultures and I can safely say every demographic was there.

I have been attending The Vancouver Canada Camera Show and Swap for over twenty years and that was evident with all the familiar faces and constant catching up with people I only knew from this occasion each year. I even stopped to talk and congratulate the organizer, Siggi Rohde on another successful show. He mentioned how some people had wondered as far back as 1992 when the first one was held if a camera swap meet could be successful.

Well, the proof this year was in all the smiling photographers cradling gear in their arms as they wandered to the next table to purchase that one more “must have” item. I have always found the secret is to buy a camera bag in which to put stuff. And what about my friends, Dave, Pat and Peter? Dave decided against the lens he had checked out, but grabbed a neat photography vest, Pat found the 60mm macro lens he wanted, and Peter ended up with a Fuji 6×9 film camera. Oh, and although I wasn’t looking for anything in particular, I did find a great deal on a manual Yongnuo flash that will fit in perfectly in my off-camera flash kit and just for fun, bought an almost new camera bag with “Nikon” boldly sewn on the top. However, Pat talked me out of it on the drive home.

Now another Vancouver Camera Swap meet has come and gone and I am left with memories of how much I enjoyed myself. Truth be known, I could go without a cent in my pocket and still have a great time, but who wants to do that? I really enjoy all comments. Thanks, John My website is at www.enmanscamera.com