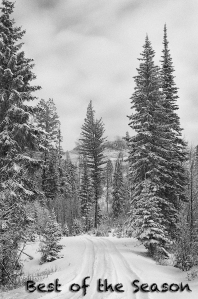 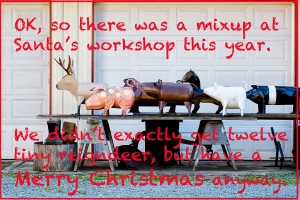 The Christmas season is a great time for photographers looking for an excuse to give friends and relatives photographs. I wrote last year saying that I always give photographs this time of year. That could mean framed photographic print gifts, but what I really mean are Christmas cards.

Several years ago my wife and I spent the beginning of December in San Francisco.

On our second day there we decided to spend the afternoon on a beach at John Muir Park, and while we were there we watched three young people involved in what we assumed was the production of a photograph for their Christmas greeting card for friends and family.  A young woman proceeded out to the water’s edge wearing a long dark skirt, a white shirt, a red vest, and a Santa Claus cap, all the while supporting a gangly four-foot Charlie Brown Christmas tree at her side.  She posed and smiled for her friends who were busy photographing her.  She was barefoot and the bottom of her long dress was getting wet as the surf rolled in.  They then each took turns holding the tree as they posed for the camera, but she was the most remarkable because of her costume.

For those satisfied with mass produced generic Christmas cards, there are stacks and stacks being offered at stores, but for photographers it’s a perfect excuse to give people photographs. And personally, I want people to see and enjoy my photography. Even if it’s only as a 5X7 card, that’s better than having my pictures left languishing in a hard drive.

My wife and I went through many of our image files from this year’s photographs selecting those we want for Christmas cards. I prefer a vertical format, but sometimes a horizontal picture also works and I will choose that also.

I print up several different images, and place different sorts of greetings on them. It is rare that we give the same picture to more than one person. And not all the cards say Merry Christmas. To me, it doesn’t matter; , have fun, a good New Year, and anything else I think fits a particular picture. Sometimes I use bits of songs or quotes I have found instead of the words, Merry Christmas

What matters is the picture and even that might be a manipulation of the original and doesn’t need to have a Christmas look at all. What is important to me is that those I give a card to get something unique. And I will say that, unlike a framed print, I really don’t care what they do with the card I sent. I really hope people like what I give them, of course, however, if it gets thrown out with the gift-wrap after the holidays it doesn’t matter either, they got to see a photograph taken by my wife, Linda, or myself, and that’s what’s important.

I like to give different pictures to different people.  Don’t be a Grinch and hide your pictures away, just showing some picture on your iphone isn’t enough. Print it, make a card, put it in an envelope, and give it to someone. And it’s easy to make a card gluing a photo to card stock or construction paper, or get a print made and write something festive on the back. In my opinion Christmas cards don’t really need to be just for Christmas. Call them greeting cards, holiday cards, or whatever you want. That way if it’s a bit late for Christmas they can be sent or delivered anyway.

Linda and I wish everyone a very Merry Christmas.