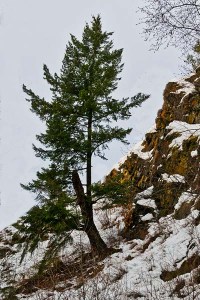 The day was grey, flat and cold. but, I was bored with watching TV and wanted to get out and put some footprints in the snow.

I lazily thought about wandering the deep snow in my yard or just taking a drive on the slushy roads above my home. However, I hadn’t visited the nearby Chase falls since a hot day in July and I thought it would be fun to see if there was any water coming over the falls.

When I visited the falls last summer I was joined by my photographer friend, Jo McAvany. I remember Jo loudly complaining about the mosquitos on that hot dry summer day. So I called her and asked if she wanted to trudge through the two-foot deep snow up to the falls and promised the mosquitos wouldn’t be too bad this time of year.

I don’t know what kind of deal she made with her husband on his day off work, but she said, “sure I want to go”.

As I thought, the trail into the falls hadn’t been tramped down by people, and other than foot prints of a lonely racoon that I expect has a warren somewhere in the river canyon to hide in when he’s not marauding garbage cans in the tiny town of Chase, we were breaking trail.

Last July Jo complained about the mosquitos. However, this time it was me complaining that I should have worn high top boots because the snow that filled my short-topped boots left little room for my feet.

I would have liked to climb down to the falls, but the snow hid all the boulders and caution said venturing beyond the trees might end in a very cold bath.

Jo had mounted a 24-105mm on her camera and I had my trusty 24-70mm on mine. We both had put longer lenses in my backpack, but the wide-angle lenses were the most comfortable to use.

The day was mostly cloudy and flat, but every now and then things lightened up just a bit. Not enough to create shadows, but at times there were highlights on protruding rocks, tree limbs and the water.

On a bright day one always struggles with overexposure on a waterfall. I prefer a slight overcast or a foggy day, and I did get some reasonable photographs of Chase Falls this time. Bright sun, deep shadows, a scene with too much contrast or mosquitos didn’t bother me this time. But just a bit more light (and less freezing snow in my boots) would have been nice.

Over the past forty years have visited those falls at least once in every season, and I can’t begin to count or even remember all the different cameras I have pointed at the falls and the surrounding area in that small canyon.

There has been lots of change as the canyon errodes, logs and boulders are swept over the falls and trees and foliage grow taller and denser. I am hoping to be making that short walk each season for at least ten more years.