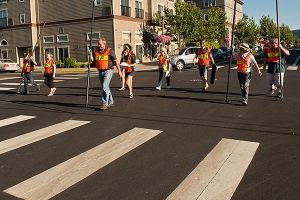 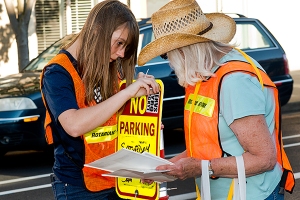 After an easy six or so hour highway drive from my home in Pritchard British Columbia and I pulled into the picturesque town of Anacortes, referred to as the homeport of the Pacific Northwest’s San Juan Islands, for an annual event called the Shipwreck Festival. Gosh, it had been two years since my return to the enjoyment of what is certainly one of my favourite places and events. The last time was when my wife, Linda, and I made two trips to that area in 2014, the first in July to Anacortes and a second the week before Halloween for a short stay in the neighbouring small town of La Connor.

The Festival’s website says that some thirty years ago commercial fisherman would gather to sell their used gear on Anacortes’ Commercial Avenue. That popular event expanded to what is now called the Shipwreck Festival, a giant community garage sale that on the third weekend of July each year occupies about nine blocks of the town’s main street, offering, unique treasures from over 200 or more businesses, organizations, antique dealers, small vendors and local families.

The Fidalgo Island Rotary Club organizes the Shipwreck Festival and this year I was fortunate to be included with the Rotary Club volunteers as photographer.

I am sure there was a lot of behind the scenes work that went on before I arrived the Friday afternoon before the big event, but I was greeted by a fresh and enthusiastic group that were gearing up to mark street locations for the next day’s deluge of vendors that I was told began happening at 4AM.

I will say that over the many years I have been attending that festival I have never heard or met with a sour word. The people I encountered are always warm and generous and after a short time one gets the feeling they are old friends. And I immediately felt that way as I joined that group decked in their Rotarian vests.

When they were finally all prepped with measuring poles, blue chalk and “street closed” signs, they fanned out onto the town’s main thoroughfare redirecting traffic and marking the street with me running around documenting everything with my camera.

I have been attending the festival for years; I don’t remember when I started. I am pretty sure I first learned about the Shipwreck Festival when joined some friends that were there for the Fidalgo Island crab festival. I also remember stopping in Anacortes with some Army buddies back in 1967. I was stationed at Ft. Lewis Washington and we set off to see as much of the state as we could on our weekend pass. I seem to remember sleeping (jammed uncomfortably) in the car. These days I sleep comfortably in motels and don’t drink as much beer as I did then.

I will say that I don’t get to make the trip every year, although I’d like to. So this year’s opportunity to join the festival’s local volunteers will stand out as one the most memorable.

I had a great time creating images that the festival committee will be able to use for next years advertisements and my fun didn’t end with just taking pictures of their efforts that afternoon. I spent the next day taking photographs and shopping.

This was the kind of vacation that I like – the opportunity participate as an event photographer, to try my hand at “street photography” on the packed avenue and to spend time photographing the coastal landscape. All less than a day’s drive from a completely different environment then the one I live in, and with a chance to meet new people, eat at great seafood restaurants, and, of course, wander the Shipwreck Festival looking for treasures. 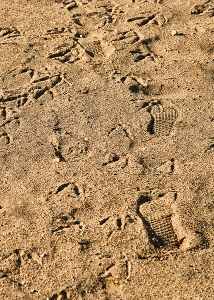 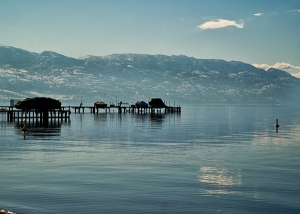 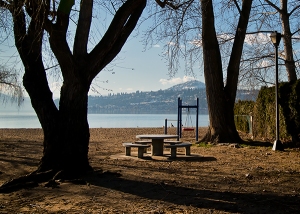 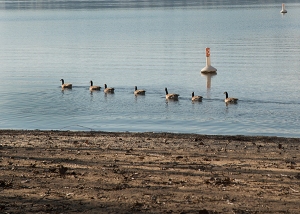 February found Linda and I spending a couple weeks in the lakeside town of Kelowna. Linda had 10 days of appointments so we decided rather than commute for four hours a day (it’s two hours each way) we would take accommodation.

Kelowna in the summer is packed. Parking is always at a premium, the cost of lodging anywhere near the beach is prohibitive and the traffic is, well the traffic is what one would expect in a city filled with vacationers. However, the days and nights in February are below freezing, and that pretty much reduces the beach crowd.

Linda’s appointments vary through out the week, but Tuesday’s was early so after a big lunch when she decided to relax with a couple magazines, I took the opportunity to grab my camera and headed to the beach.

I know that beach area pretty well. I have never seen a parking space during the summer, and any photographer wanting to capture photos of the beach, the lake, or distant mountains has to be content with lots of people included in their photographs.

My thought was to build a series of images that discussed the cold, empty winter lakeside. And I decided no matter what I saw I would limit myself to only photographs of the waterfront.

That meant to ignore the extravagant architecture of the beachfront homes, expensive cars and, of course, people. However, I was tempted to get shots of a guy eating a cup of ice cream while walking with his dog, and later on, two women slurping milk shakes while walking along on the breezy minus 6 Celsius day. There’s something to be said about Canadians.

I even declined when two tattered guys came up to me and suggested they would make good photo subjects. One fellow was waving a broken golf club handle and I stepped back saying, “I am not doing people today”. We all laughed and they ambled on leaving me alone on the beach.

The winter beach is interesting. Shoeprints in the sand instead of bare feet, the hordes of sun worshippers and swimmers are absent and the lake that’s usually a waterscape of boats has only ducks and geese this time of year.

I walked for two hours along the waterfront before deciding to turn back. And when I found a deserted bench I just sat enjoying the solitude. There is something about wandering alone along a big lake that is bordered by a large active city. I guess there is some isolation, but the noise never stops. Nevertheless, it’s an excellent opportunity to creatively point a camera without any interference. 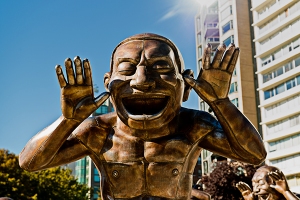 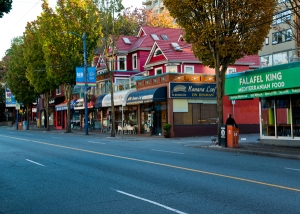 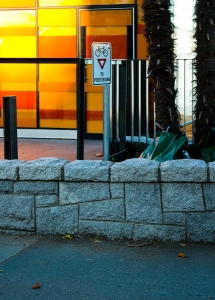 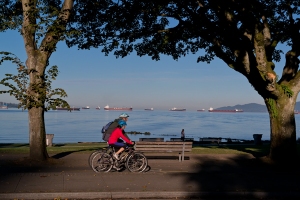 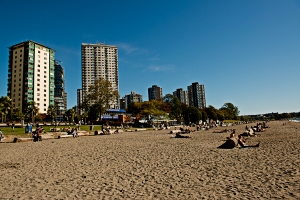 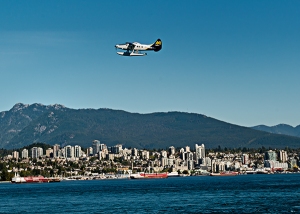 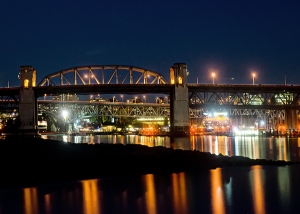 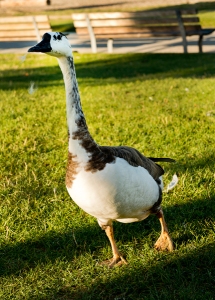 “We should go on some kind of trip”.  When my wife said that a month ago she didn’t have to do much to convince me.  So about an hour later we had reserved a top floor room at the hotel on the corner of Davie and Denman Streets in Vancouver.

We chose Monday, Tuesday and Wednesday, so we would miss the weekend rush.  After a picturesque five-hour drive through British Columbia’s coastal mountains I was carrying suitcases and my bag loaded with our cameras up to our room.

What a great location. Not only were we moments away from the restaurant and bar scene of one of Vancouver’s most exciting areas that divides the city from the magnificent 400-hectare natural rainforest of Stanley Park, but right across the boulevard from our hotel was picturesque English Bay.

I discovered Denman Street when I first moved to Canada in the 1970s. Maybe it was the curiosity I had for a street that sounded and was spelled pretty closely to my name, I don’t know. But in any case the street was just as much fun then as it is all these years later.  One can either join others people watching while sitting at an out door pub, or choose food from almost any country in the world. We chose Greek at the English Bay for our first evening meal of the trip.

The next morning, while my wife slept I put a 24-70mm lens on my camera and headed out. There wasn’t much traffic on the street, or people walking along Denman. It was easy to photograph the buildings and I picked out a funky little coffee shop that we could go to later.  I walked the street and wandered the alley behind our hotel, (I like alleys) then headed for the beach.

My mother always told me to look both ways and be careful of cars when I crossed the street, but she never told me how dangerous it was to cross the bike path along English Bay. I dodged several riders and jumped to the lawn covered with slippery geese droppings when a woman rider zoomed by yelling, “Bikes only!”

I suppose I have become one of those hick tourists gawking at all the sights of the big city, but I reached the safety of the beach where I could meander along pointing my camera where I pleased.  Gosh, I even got to meet local Vancouver photographer Trent Watts, who was kind enough to take time out of his morning to talk with me.

Linda finally got up, and after coffee at the little shop I found earlier, we decided to drive into Stanley Park to take pictures of the harbour and stopped for anything we thought might make a fun picture. We also were looking for a good vantage to take some night pictures of the bright city across the harbour. Gosh, we had so much fun we overlooked having lunch.

Much later we wanted to try our hotel’s fish n’ chips special being offered for supper, however even that had to wait because I stopped to photograph and talk with the two Canadian Mounties who have special dispensation to rest their horses after touring through the park in the cool pleasant entrance of our hotel’s basement parkade.

After supper I went out for night shots of the Granville Street Bridge that crosses both a boat filled water way into English Bay and the shopping district of Granville Island and joined several other photographers on the beach as the sun went down. Then just after 8:30 packed up and drove off for more photos at the location we had chosen in the park.

The next morning I must have been tired after all the previous day’s activities, because after I had photographed a white goose honking loudly at me on the beach I checked my watch and it was a late 7AM.  Oh, well I had a good time and anyway I was on vacation!