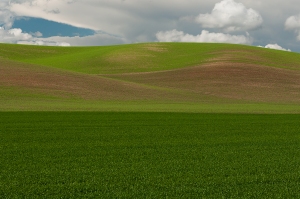 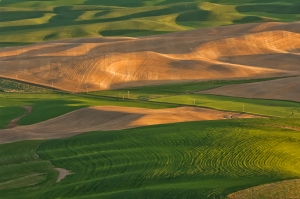 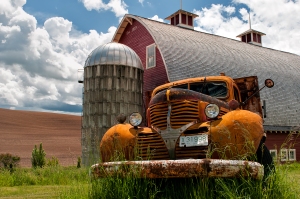 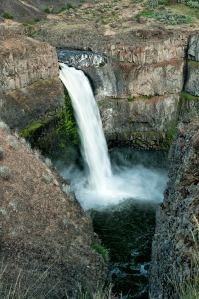 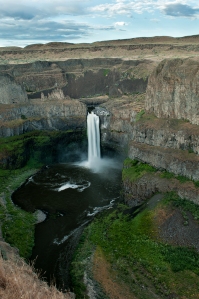 Here’s the situation.  It is 3:00 am and the motel was buzzing with photographers packing camera bags and tripods in vehicles. Even in my tired fog caused by the long, eight-hour drive the day before, and a late evening talking with photographer Andrew Wozniaka till midnight.  I identified at least three other groups from the one I was with heading off for the Steptoe Butte overlook to wait for sunrise to photograph the patterns on the picturesque dunes of the Palouse.

Located south of Spokane, Washington, the Palouse (pe-looss) region of northwestern United States encompasses parts of southeastern Washington, north central Idaho and extends south into northeastern Oregon.  The peculiar and picturesque dunes, which characterize the Palouse prairie formed during the ice age by soil blown in from the glacial outwash plains to the west and south, the Palouse hills are now mostly actively farmed random humps and hollows.

I had joined four others for an Aaron Reed photography workshop, “The Palouse – Exposure Northwest”.  One could just visit the Palouse and wander around without an organized group, but having a leader that knows the area extremely well, if nothing else, will save time wandering from site to site.

Our excursion began early in the morning with a drive to Steptoe butte. Other photographers that had traveled there from all over North America joined us and some even came there from other parts of the world, although I am sure I was the only Canadian on that morning.

There were toe-to-toe tripods waiting for the sun to work its way across the manicured rolling dunes of the Palouse. As the sun rose a colourful landscape was illuminated, shutters were released, and the excitement began. It took me a while to really look into the landscape and isolate patterns. I am used to photographing landscapes that include mountains, trees, lakes and rivers from my part of the world, and it took me a while to watch and see just the patterns of the undulating landscape.

The interesting light only lasted for about an hour, then the patterns caused by the sun’s low horizontal light were gone and it was time to look for other subjects. Reed had picked out other places to go and until late in the afternoon we spent our time photographing deserted buildings and derelict cars and trucks.

While we stopped I saw a tractor plowing the miles of fields. I liked the dust clouds surrounding it so I ran out in the field and made several exposures. When the farmer finally drove to our location he stopped (covering us all with a thick coat of dust in the process) and got out to say hello.  We had been photographing a particularly distinctive old clapboard building and I asked him how old it was. His comment was, “Well, the house I live in was built in 1901 and my aunt lived in this house long before that”.

Our final destination of the first day was Palouse Falls State Park and the spectacular Palouse falls with its 186 feet (57 meter) drop.  The scenic and impressive falls can’t be seen until you are nearly on top of it. The broad, broken plateau of black basalt that stretches out to the horizon falls away and there they are: the thundering waters of Palouse Falls pounding down into a circular bowl carved out of the cinder-black rock.

We wandered along the precarious edge making pictures till the sun dropped below the horizon around 9PM. Actually the best time to make images of the falls was just as the sun went down because the contrast between the bottom and the top was pretty drastic.

The itinerary of sun up to sun down photography was repeated on the second day. I will say the long days were tiring, but I’d do it again. Well, after a good long rest.

Spending time getting tips on landscape photography from a photographer of Aaron Reed’s caliber was great as was the camaraderie of the others I met on those two days.  And the opportunity to photograph the Palouse was an exceptional experience.

I always appreciate any comments. Thanks, John

31 responses to “Photographing the Washington Palouse”