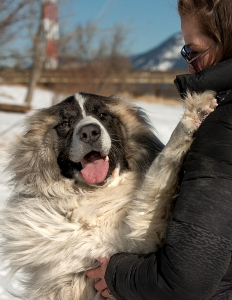 When my friend Jo McAvany told me she wanted to do something the combined her love of photography and love of large breed dogs I was intrigued. She said she was planning to make a photograph book of big dogs that live in the Kamloops area.

Jo intends to spend the next year photographing the dogs in all seasons and at different locations throughout the year.

For the past two years that I have known her I’ve been pushing her to use lighting when photographing people indoors and out. She began by attending my lighting workshops and eventually became my ever-helpful teaching partner.

I guess I shouldn’t have been surprised when she said. “Will you help me with the lighting on my project”. I readily said I would.

Flash technology made quite a leap from the manual settings we once used to when Nikon added TTL in the early 1980s. That was when I sold all my Pentax and Canon equipment and “jumped” to Nikon. (I am pretty sure all modern cameras have TTL flash capability)

Flash took another large step when digital cameras became the norm. TTL was already almost foolproof and digital technology offered added control. Then it again matured and “High-speed Sync” was introduced and mastery over light in any environment and condition became easy.

Manufacturers began offering portable wireless units that, unlike the dedicated speedlights a photographer usually purchases with their camera, are much like those powerful units used in serious studios.

For readers that aren’t familiar with flash, High-speed sync means a photographer is no longer limited to the normal 1/200th or 1/250th second flash sync most speedlights use. HSS allows a sync speed up to 1/8000 of a second.

When I teach workshops on Flash I tell participants that the Shutter controls the ambient light and the Aperture controls the flash power. And remind them that increasing the shutterspeed allows us to widen the aperture.

When Jo walked out in the white, painfully reflective snow on a bright cloudless day to photograph those dogs this past week the contrast between the shadows and highlights were enough to ruin the pictures. However, I added flash and moved around to change the direction of the light fell on her subject. All she had to do was reduce the ambient light by increasing her shutterspeed and change the flash brightness by stopping down or opening up her aperture. Our goal was to balance the light on the dogs as evenly as possible without Jo’s final image showing that a flash was even employed.

Jo worked with the owners to pose the dogs. She’s very precise when it comes to how she wants them to be for the photograph. My job was to pay attention to the flash-to-subject distance and keep checking to make sure the light wasn’t to bright or to dark.

Confining oneself to only natural light means there will be elements beyond control. Natural light limits when and where one can shoot during the day. With the sun high in the sky at noon, there will either be a backlit silhouette, or the bright light will blind the subject and create black shadows. And if it starts snowing or raining, there usually won’t be enough light to shoot indoors.

Flash gives a photographer 100% control over the lighting. Whether completely doing away with the ambient light in the studio or adding flash with natural light outdoors, the photographer is in charge and can get the light to look exactly the way he or she wants it at any time of day.

“I have never used a flash.” That was a statement from a young photographer just starting to photograph weddings of her friends. She had stopped by to purchase a lens hood (very good idea for any lens) and while we talked she wondered about how I dealt with contrasting shadows on sunny days and if a polarizing filter might help her get rid of them.

Polarizing light with a polarizing filter will reduce glare in the sky and on reflective surfaces like water and windows, but it doesn’t reduce shadows or contrast. It will decrease the amount of overall light coming through a lens. If a lens is fitted with a polarizing filter light is polarized if it reaches the lens from any angle, but if the sun is directly in front or behind the photographer the light will not be polarized. For this young photographer using a polarizer won’t noticeably affect her wedding photographs in any way other than to maybe darken the sky behind the wedding couple.

I told her that I always use a flash indoors and outdoors when photographing people and she said “even in bright sunlight?” I use the flash to fill or reduce the shadows caused by bright sunlight. Modern TTL (through the lens) flash technology is easy to use and almost fool proof and the days of calculating distance and flash power are long gone.

Many photographers think the only time to use a flash is in a darkened room and because they haven’t learned how to use flash effectively are now relying on high ISO camera settings that will let them shoot in low light interiors. ISO stands for International Standards Organization and determines the sensitivity to light for which sensor is set.

I think relying on high ISO settings is great for those long shots inside the gym during basketball games or when capturing wide church interiors, however, closer pictures of people with mixed lighting coming from overhead leave unflattering shadows and colours crossing their face.

My camera is fitted with a flash bracket that lifts the flash about six inches above the lens. Most camera hotshoes place the flash close and directly over the lens and that close proximity usually causes an effect called “red eye” – the appearance of red pupils in the eyes. Moving the flash away from the lens helps to reduce that effect, and when I move in close for photographs I always place a diffuser over my flash head to spread and soften the light.

Using my flash like that gives me broad, even lighting on people and I set my shutter, aperture, ISO, and flash output so those individuals are slightly brighter than the surrounding area and the background. My flash bracket can be positioned for best effect whether I use my camera horizontally or vertical. The flash is connected to the camera with a power cord that fires it when the shutter is released. I can remove it (and much of the time do) from the bracket and point the flash in any direction I want; bouncing the light off walls, the floor and, if I want, higher than the people sitting in front of me. I can leave them in low light while I point the flash at arms length, from an angle to the side or from above the individuals I am photographing.

Just as there are photographers that leave their cameras’ setting on “program” or “auto mode” and expect good results, there are also those photographers that are unaware how important a good quality flash is. However, in the last few years more photographers that are concerned with their images are using a flash, and not the tiny popup flash that many cameras have, but a flash with the power to illuminate spaces much larger than a family dining room. There are many informational sites on the Internet dedicated to using and controlling flash and probably the most visited is http://www.strobist.blogspot.com.

When I learned to use a flash many years ago it changed the quality of my photography. I no longer had to rely only on ambient light and I began to notice my subjects had more “pop” than those without the flash as I learned to add light to a subjects face instead of only using it to illuminate or make that person brighter in a dim room. Just like the control I gained by using different focal length lenses, using the flash allowed me to add light when I needed it, improving the quality of my photographs and separating my photography from who do not to use flash.