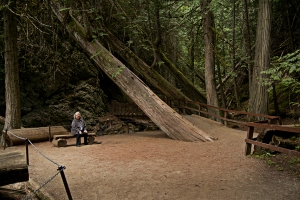 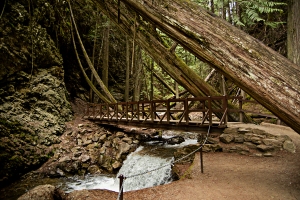 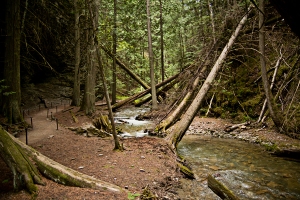 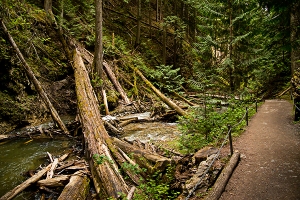 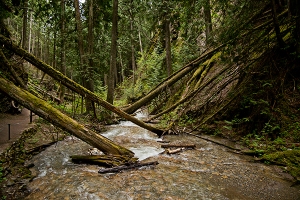 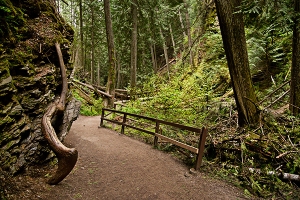 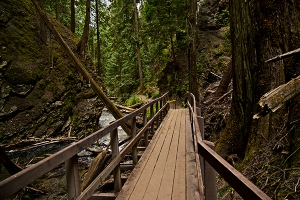 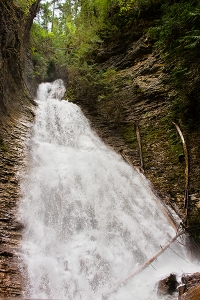 I have spent the last few days slowly dismantling an old shed I built over 20 years ago. I will say that I enjoyed building that ramshackle structure that has served as a goat barn, a chicken coup, and lastly for storing stuff I didn’t know what to do with. The process of destruction hasn’t been going all that quickly because I have been finding any excuse to delay my work taking it apart and I suppose that’s why when my wife mentioned it would be pleasant to go to Margaret Falls I didn’t hesitate to put our cameras in the car and head out for an easy drive.

Margaret Falls is a 200 feet high cascade that drops into Reinecker Creek on the edge of Shuswap Lake’s Herald Provincial Park. Local lore says the falls gets its name from the first white woman to see them. I also have been told it was called Reinecker Falls. But I wonder what that place was called by those that went there long before the white settlers.

It is the place, and not the waterfall that draws tourists and photographers to make the short trek through that moss covered, old-growth cedar forest nestled in a narrow gorge.

Reinecker Creek falls down a sheer rock face and into the narrow chasm creating a wonderland for those that walk along the beautiful gulley filled with large trees and looming cliffs above.

Before one is even aware of the unique ecosystem, there is the envelopment of a waft cool, damp air that on a hot July day will be a startling difference in temperature. Knowing that we included jackets with our camera gear.

Over the years Linda and I have spent many hours wandering along paths with cameras and tripods, but this time the wind was picking up and we could see large, dark clouds looming. So we just brought our cameras in case we had to make a quick getaway. I do not remember how many times I have taken pictures along that cool walkway up to the falls, or all the different camera formats I have used. I have been there in every season of the year, rain or snow, and I have even photographed a wedding there.

For this visit Linda used a 24mm prime and I used my 24-85mm zoom. Wide angle is a must for that narrow canyon.

The overcast day really wasn’t a bother because our modern full-frame cameras can easily handle 1600 ISO and depending on our subject’s location we could choose either 125th or 250th of a second shutterspeed an still keep our aperture small enough to get reasonable depth-of-field.

One rarely has the trail to Margaret Falls to themselves. To achieve scenic photography photographers have to be patient. However, this outing was petty good. Our only interruption was a guy on his mountain bicycle that turned around and left when he realized there were people on the trail. And we met some people that told us they were celebrating their 70th reunion. They gently ambled up the path to the waterfalls, extended their arms for cell phone snaps and then left, giving us all the time we needed to compose our pictures. I did have a good time, but, as free as I was to wander around with my camera and 24-85mm lens, I missed having my tripod. We have decided to return in a week or two packing tripods and neutral density filters prepared and spend a bit more time.

I always look forward to comments. Thanks, John