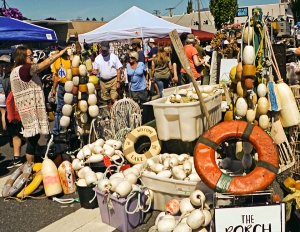 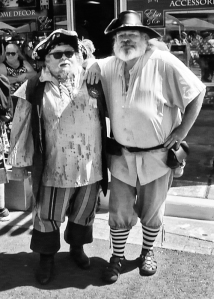 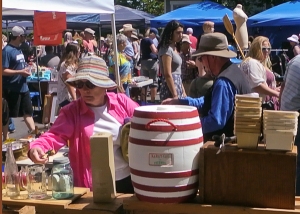 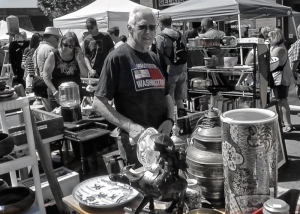 Each year the month of July brings two of my favourite photography events.

The first is the Pritchard Rodeo and the second is the Anacortes Shipwreck Festival. Gosh, what an exciting month July is for photography.

The preceding week had been cool and a bit rainy on the Washington coast, but when we reached the festival my friend Jo and I were met with a warm day that had just enough clouds in the sky to make it comfortable to walk around the 9 block street market filled with 400 interesting booths.

We had arrived in the town of Anacortes at the tip of Fidalgo Island after a pleasant drive the day before the annual Shipwreck Festival.

The locals say that the Shipwreck Festival began thirty-eight years ago when fishermen sold their used gear on the town’s main street. Since then the event has evolved into a giant garage sale/flea market that includes vendors that seem to be from as far away as Mexico.

Last year I wrote, “Whew, what a day. We saw, we touched, we photographed, and we talked to people from 9AM to 3PM. Then we stepped into a popular Commercial Avenue Alehouse called the Brown Lantern for a late lunch and I gladly got to rest my tired legs. I am sure Jo will recommend the crab and corn chowder she ate and I agree that both my food and the two beers I drank were the refuelling I needed.”

Well I can write that again this year, we again got to see, touch and even purchase unusual treasures, and I had a fun time photographing people on the crowded street.

Jo got to have that bowl of the crab & corn chowder she had been dreaming about since last July and I enjoyed two very dark beers while I rested my old legs. Then just as last year we were off for another look around and a few more pictures of the crowded street of happy bargain hunters.

I do like the treasure shopping as much as anyone, but watching the people and photographing everything on that island is what brings me back each year.

I have tried different cameras. When I first came in mid-1990s I used a Nikon F3 film camera. Then when digital arrived I used several different DSLRs until last year when I changed to a tiny Nikon 1 mirrorless.

What I like about the (recently discontinued) little interchangeable lens camera is it’s small size and quick focusing. I carry it in an old army bag that allows me to pull it out fast for street photos without getting attention from those around me.

The Nikon 1 doesn’t have the large higher quality sensors of the big and more expensive mirrorless cameras like the Fuji or Sony, but like any other tool that one might select for a specific job the little Nikon is great for the internet or even 8X10 prints.

This was the kind of vacation trip that I like, wandering the Shipwreck festival looking for treasures, (I bought a handmade flit blade knife) doing photography on the crowded avenue, meeting new people and getting to eat fresh seafood at local restaurants. All less than a day’s drive to from the very different environment where I live.

3 responses to “A photographer’s holiday at the Shipwreck festival      ”