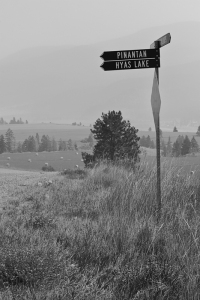 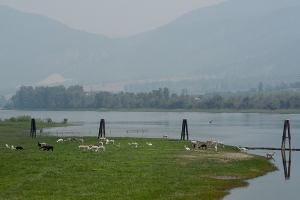 Another summer is about half over and as usual, or what we here in the interior of British Columbia have come to regard as usual and normal, the sky and air is filled with an orange-grey choking smoke. It seems this year, to make life just a bit more uncomfortable, the days and most of the nights are also reaching record high temperatures.

Its cooler inside, I have fans blowing on every level and corner of my home. But as comfortable as that is I got to wondering what I could do with my camera to capture the feeling I had when walking down the street to pick up Monday’s mail.

I decided to drive cross the river and take the dusty road that runs along the riverbank from the Pritchard Bridge to Kamloops.

Making a proper exposure in the flat light was easy. I just selected my camera’s Aperture Priority mode, a handhold able shutterspeed of 1/250th, and an aperture small enough to give me a good depth of field.

I quickly noticed that, like the fog, the moving smoke isn’t the best subject to focus on if one wants a sharp image. I always selected something in the scene that was stable, like a tree, sign post or hay bale.

The heavy smoke filled sky never did allow the day to brighten up, and other than close objects most of the landscape was shrouded in an eerie slightly translucence with visibility probably a bit less than a mile.

I liked photographing the almost orange glow and the disappearing hills. Nearby features popped out with colour, while those in the distance lost detail and colour as they were swallowed up in the smoky gloom.

I am not one to join those stouthearted photographers standing behind the firefighters camera in hand capturing the terror and beauty of the advancing wildfire flames. I figure there are enough of those that are doing a great job.

What intrigue me is the fading light and the thickening smoke that changes the colourful landscape I am so accustomed to a monotone world of disappearing features.

I suppose one could hold up in some air-conditioned fortress and complain about what a person that camera into my shop today described as an “overwhelming campfire smell”. But for me, as I did this week and plan on again in a day or two, getting out in the changing landscape and take more pictures is interesting and stimulating.

I don’t for a moment loose the thought that there are thousands of men and women from all over the world fighting the multitude of dangerous fires here in BC. I also count myself fortunate that the fires are not yet threatening my home.

Nevertheless, the thick smoke is an opportunity to photograph in a different kind of light that I might as well take advantage of.