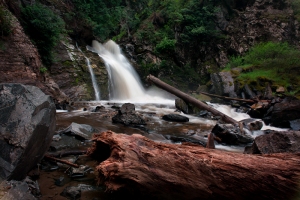 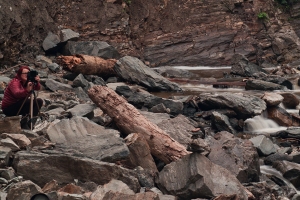 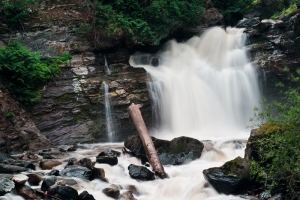 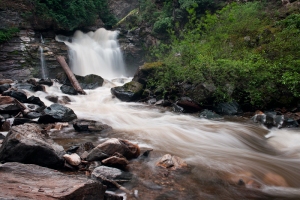 I have been keeping close to home with my last few posts.

With that in mind I decided a quick fifteen-minute highway drive to a waterfall that feeds a creek running through the small town of Chase would still fill that objective.

I try to visit that local falls for a few pictures every season and this past week was the first time I ventured there since I trudged to those falls through the deep snows last February.

On that excursion to the falls the deep snowy path was untouched except for small footprints made by some lonely racoon. This time there had been lots of people evidenced by discarded hamburger wrappers, plastic cups and the scattered remains of a styrofoam carton.

There was lots of spring water coming over the falls and by the looks of all the huge logs, boulders and the dangerously eroded path, it’s obvious that the early June melt must have produced a torrential flood of water in the small creek.

As with last February, I asked my photographer pal, Jo, to accompany me. She had remembered our last Chase falls adventure and mounted a 24-105mm on her camera while I had my trusty 24-70mm on mine.

Like that cold winter day it was cloudy and flat with just a bit of sun poking through to lighten up the forested creak a bit. Fortunately it was not enough to create shadows, although at times there were highlights on protruding rocks, tree limbs and the churning water.

I chose the day because of the slight overcast. On a bright day one will struggle with overexposure on the white, reflective waterfall. As I wrote in February, I prefer a slight overcast or a foggy day. Bright sun and deep shadows create too much contrast.

With our cameras tightly secured to tripods we set our lenses to apertures that would give us plenty of depth of field. Selected shutterspeeds over two minutes and placed neutral density filters in front of our lenses to reduce the amount of light so our slow shutterspeeds wouldn’t overexpose the scene.

We set and used the camera’s self-timer so as to reduce camera shake and started taking pictures from every angle we could get to. That meant a lot of climbing over the jumble of large stones.

Photographing waterfalls are easy and no special talent or equipment is needed. I use a DSLR, tripod and ND filters. There’s nothing that most serious scenic photographers won’t already have.

We had a great time and I will absolutely be back in another month or two. I like to photograph that little waterfall with my infrared converted camera. July and August will be perfect for that. I’ll also be back in September or October when the volume of water is dramatically decreased. Then winter, and everything starts over again.

Photography is like that to me, and pointing my camera at the same subjects over and over year after year is just plain fun. This past month I have been sticking close to home. However, I plan to go a bit further from home now that summer is here. My goal, no matter where I am or what the subject is, is the enjoyment of making photographs.

There was a 1950’s street photographer named Leon Levinsein that wrote, “I walk, I look, I see, I stop, I photograph.”

I suppose it’s as simple as that.