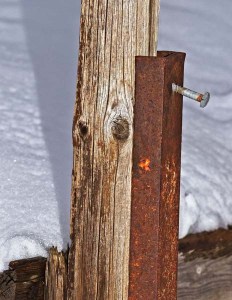 My friend, neighbour, and photo pal Jo decided to give herself an early morning photo challenge. That meant after feeding her kids, 6 dogs, making sure her 13 year old son is ready for school and greeting her tired husband after his long night shift, she quickly sneaks out with her camera to create artistic images out of normally uninspiring objects she finds close to her rural home.

I first knew Jo was taking this challenge on when she texted me a picture of deer chomping on her neighbour’s bushes one morning. She casually added a close-up of snow that had drifted around a small tree trunk. I was thrilled with how she captured the play of light and shadow on something most photographers would walk past.

The mundane, normal features people ignore along the snow laden winter neighbourhood street as they dash from their warm homes, coffee in hand to jump in their cold cars, and join the morning battalion on the icy highway, are Jo’s chosen subjects.

I wonder what people think as they look out their windows at Jo all bundled up, holding her camera in gloved hands as she wanders the vacant streets. I can imagine her dodging oncoming cars as they slip along the icy snow packed street.

What those drivers are thinking when they see her standing calf deep in the snow, photographing a tree branch.

I’ll add this first quote by the iconic American photographer Annie Leibovitz, “The camera makes you forget you’re there. It’s not like you are hiding but you forget, you are just looking so much.”

I like her words, and I am pretty sure that most serious photographers get lost in the moment when they look into a scene searching to create interest out of some normally unremarkable object.

Of all the photography challenges people post on the many social media sites I think I like this one the most. It is hard for us to find interest in the world we walk by everyday. And forcing oneself to be creative with some unremarkable subject is a struggle, let alone wandering around on a cold February morning just after sun up.

I asked Jo why she likes to meander around with her camera in the early morning. She wasn’t sure, and at first only said, “because its peaceful”. However, I think there is more to that kind of challenge than searching for a peaceful moment. I know her enough to say that she is demanding in her photography, and is always exploring alternatives.

Photography is such an exciting medium that lets us examine the world around us in our own personal way. This kind of photographer’s challenge does just that.

I’ll end this with a couple quotes by Depression era photojournalist Dorothea Lange who wrote, “A camera is a tool for learning how to see without a camera.” And she also wrote “To know ahead of time what you’re looking for means you’re then only photographing your own preconceptions, which is very limiting, and often false.”