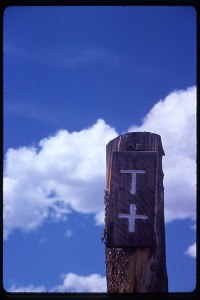 I joined a friend for lunch last week and he began reminiscing about his long ago trip to Japan. We hadn’t been talking about that place, but something in the restaurant (could it have been the sushi?) brought his memories on. With that in mind I thought I’d revisit this article from 2011.

I am sure many of us experience that flash of instant memories when some song comes on the radio. That happed to me this morning as I drove to town. A 1970’s song by the Bee Gees came on the radio, and suddenly I was thinking about July 1978 when I played their tape over and over during my journey to a place in Wyoming’s Teton Mountain range called the T Cross Ranch. I was there attending a photography workshop lead by photographer, and writer, Boyd Norton.

I had been given Norton’s book “Wilderness Photography”. I poured over that book with its instructions and ideas about photographing the great out-of-doors. I don’t recall how I found out about his class, nevertheless I was so determined to attend that I sold my VW to pay for it. The cash from that sale was enough for my tuition and expenses to Wyoming, it also helped pay for an airline ticket for my girl friend (later my wife) to Salt Lake City, Utah. Our plan was to meet up there after my course and spend time photographing Arches National Monument, Zion Park and the Grand Canyon.

The T Cross Ranch was just outside of Dubois, Wyoming, and our class was comprised of photographers from Germany, New York, Florida, Idaho, Colorado, Tennessee, and two of us from Kamloops British Columbia.

We hiked and wandered during the days, photographed everything, and in the evenings had lectures in a wonderful 100-year-old antique-filled log house.

Our instructor wanted to provide instant feedback for us and had a new three-chemical-process for developing slide film. The first morning I noticed him reading the instructions and without thinking I said I could figure it out and immediately became the official class technician. So each evening while my classmates were sitting around the fire talking about the day’s events I was in an abandoned walk-in cold room removing film from cassettes, rolling them into large processing tanks, then developing and hanging the rolls for overnight drying. Hmm…me and my big mouth! We were excited that we could have our images for critique so quickly. I thought that film technology had finally become the best it could be.

I preferred using a huge Mamiya RB67 at that time. The RB used 120mm medium format film and the negatives were 2¼x2¾ inches.

One afternoon we trucked up to a mountain plateau and Norton said, “There is a lightning storm to the west and we’ll see antelope coming this way to stay out it. Find yourself a good position for some great shots.” I waited behind an old salt lick as several antelope came bounding our way. The lens on the RB67 racked back and forth on a rail instead of turning like modern lenses. I tried to keep the antelopes in focus as they ran toward us, but to my dismay I couldn’t. I didn’t get a shot!

When I came back within weeks I sold the RB and purchased a jaunty little Hasselblad that I used for years, until, coincidentally, I attended another wilderness class in 1999, that time in Washington State, and was introduced to digital. I returned to Kamloops after that class and bought my first DSLR. Both instances were because of the influence of other photographers. Getting together with other photographers, in my opinion, not only creates excitement, but also is the best thing one can do to become a better photographer.

Reminiscing about that trip while I listened to the Be Gees was fun. However it also reminded me was how important it is to interact with other photographers and participate in workshops, classes, and photo tours. The other thing I thought about as I sat rewriting this article is how dramatically and constantly, technology changes for those of us dedicated to this exciting medium of photography.

7 responses to “Memories and photography   ”