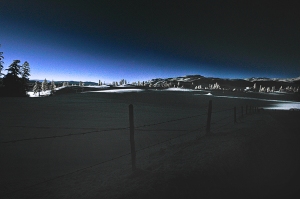 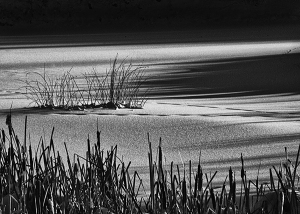 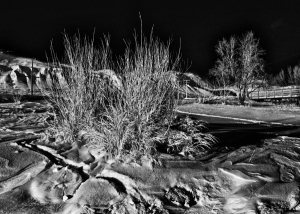 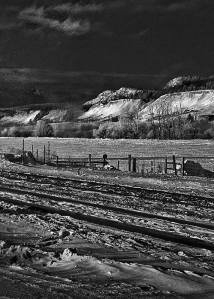 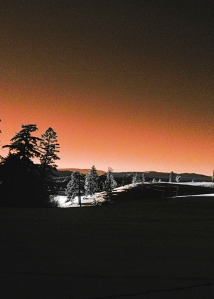 Gosh, this cold weather is uncomfortable! Mostly I have been huddling inside except to feed my chickens, and dig through the latest snowfall so I can get my car out of the driveway. However, the morning’s sky was so clear and blue that, in spite of the negative -19C, I just had to bundle up against the cold and head outside with my infrared camera.

The contrast of clear blue against the fresh white snow would make for a colourful scene, but there is something about infrared that has always intrigued me.

Maybe it’s the black sky against the brighter foreground. There is a word I remember my art instructors would sometimes use in their discussions and it is, “juxtaposition”, or elements in an image placed together with a contrasting effect.

In the summer infrared turns the trees to white, the sky a strange shade of magenta, and everything else a slight blue. But in the winter one can create an image with magenta tinted snow and clouds, with a blue cast to the sky by adjusting the colour channels in Photoshop, or convert to a striking black and white image. B&W is always my favourite. I guess that it is from the many years of exposing rolls of Kodak infrared film. And as I said, I like the black skies.

Infrared creates a completely different feeling. I have written before that using a modified camera is an exploration that moves a photographer far from the usual setting with the effect being surreal and unworldly. The bluer the sky, the greater the likelihood of that unworldly effect; and white surfaces can glow with an ethereal brightness.

I haven’t used my IR camera since last October when I decided to try out a fisheye lens.

Since then I acquired an 18-35mm, so I took that and my favourite, a 24-85mm lens out to see what I could get. I prefer a plan as opposed to just driving around, but this time I wouldn’t venture very far from my warm car. Besides the cold I was too lazy to get my shoeshoes and the snow was too deep to go off the plowed road.

I am not a prolific shooter. I guess that’s an oddity in this day of shotgun style photography when it’s not unusual for photographers to return with a hundred or so images from only a few hours of shooting. I spent a lot of time just standing and looking, and as was the case this time, freezing my fingers.

The low-angled light from the afternoon created lots of deep shadows on the drifts of snow and from fence posts, train tracks, and stark, leafless trees. All are excellent subjects for infrared.

If there was a goal for this outing it was to get a picture for next month’s calendar. My wife Linda and I alternate monthly as to who’s picture is displayed for each month’s calendar, and one of my infrared captures should work perfectly for February.

17 responses to “Infrared Photography On A Cold Winter Day   ”