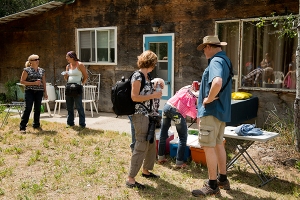 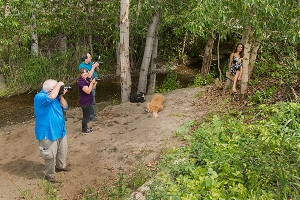 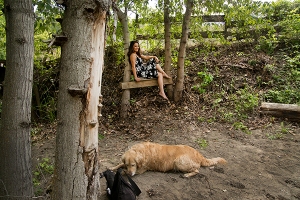 I was invited to attend a photographer’s open house at a local studio last Sunday. The owners, Dave and Cynthia Monsees, hosted the event and invited photographers of all levels to attend. On their Facebook page they had posted “Versatile Studio took delivery of some new equipment this week. Two new 300-watt strobes arrived along with a 60-inch Octobox that is going to be interesting to use. We now have a 480-watt battery powered strobe complete with a 24-inch soft box for use anywhere on the site. More changes are happening outside of the Studio as we continue to grow.”

Versatile Studio is probably one of the best-equipped rental studios in the British Columbia interior, with a wide array of lighting equipment for use in the studio or on the studio grounds. As well as the indoor location, Versatile Studio facilities include a large open-sided barn equipped with backdrop and electricity for lighting equipment, a mowed meadow complete with an antique buggy and old farm implements, an old Cadillac resting in a field, and the real favourite, a tree lined stream with a sandy beach.

I joined several others to include a local photographer’s group called Coffee n’ Click, several members of the Kamloops Photo Arts Club, and other serious photographers, and I was pleased when Dave told me that twenty-five signed his guestbook. I wish I had thought to get a group photo.

The day started at 10am with refreshments. After a short welcome everyone split up and the excitement began. Several chose to use the studio and I decided to set up high key lighting for Ashley, one of the three models volunteering that day. The other models were Monica and Shy-lyn.

Several photographers walked to the meadow where a neighbor had brought over her horse and a donkey for models to pose on. Another group chose go down to the stream to take pictures.

I didn’t stay long in the studio. There were so many excited people competing for the model’s attention that after a couple quick portraits I moved on. A Harley Davidson motorcycle had also been loaned to the studio and I rolled it into position in front of a painted backdrop that hung in the open barn, where I tried out the new battery operated, wireless 480w studio light with a 60-inch Octabox, and added a large gold reflector I had brought from my store. The results were great.

The day was fun, most photographers barely stopped for lunch and before I knew it people were roasting hotdogs over an open fire and it was 4pm. I enjoy events like this where one can interact with other photographers are just having fun doing photography. Usually I use that studio as a place of work where I lead workshops on studio lighting, but on this day I didn’t have to be “on” and was able to relax and talk to other photographers.

This week the Kamloops Photographer’s Facebook page was filled with photographs from the open house. I am pretty confident that everyone had a great time at Versatile Studio’s event.

I always look forward to your comments. Thanks, John