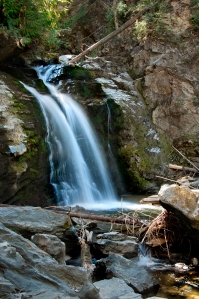 The week had been a busy one for me. Unfortunately none of what occupied me had anything to do with photography.  It is said that life gets in the way of having fun.  So when I finally was able to chisel out some time for myself this last weekend I decided to travel the short distance up the road from my home to a stream with waterfall.  The falls are just off the Trans Canada Highway as it winds past Chase, BC.

I brought along my tripod, selected my versatile 18-200mm lens, a polarizing filter, and a neutral density filter just in case there was lots of bright light, and headed out. When I arrived at the creek and walked along the well-worn path beside the rock-strewn creek up to the waterfall I found there was open shade everywhere. It was just before noon, and the sun’s direction against the large flat rocks that lined the narrow canyon was providing lots of soft, reflective light on the cliffs, the water, and the pile of logs that surrounded the falls left over from the flooding of waterways that occurred in British Columbia this spring. I don’t think I could have asked for better light. There was very little of the harsh sunlight I had anticipated so I didn’t have to use the neutral density filter, and because of all the soft reflected light I didn’t have deep shadows to contend with either.

I climbed down the large rocks to the stream just below the falls, set up my tripod and started shooting. I like the soft look of water that a long shutterspeed creates so I began by putting the polarizer on the lens, which reduced the light by about two stops. Then I set the ISO to 100 and stopped the lens down to F/11. That gave me a shutterspeed of three seconds.

Photographing water is fun. I enjoy waterfalls, but rushing streams or rivers, plant covered ponds, and mountain lakes are just as enticing. I think it’s how the water sculpts everything that surrounds it.

Waterfalls usually demand a wide-angle lens and a tripod. A wide angle allows photographers to capture the landscape that contains a waterfall and the tripod means there won’t be camera shake. The lens doesn’t need to have a wide aperture because in landscape photography, and that include a landscape with a water feature like a waterfall, one should be stopping the aperture down to create as much depth of field as possible. The important thing, if one wants that glowing, soft looking water is a slow shutterspeed.  And when the shutter is slowed the aperture must be closed, and with a smaller aperture comes more depth of field. I will also mention that a cable release is a good idea to reduce camera shake, but I seem to always forget mine, and so I use the camera’s self-timer instead.

For those who live in the British Columbia there is no shortage of waterfalls that are easy to photograph, and for many like me the waterfalls are only minutes away. Small falls like the one I go to certainly don’t match some of the spectacular waterfalls from around the world, but even tiny falls make good pictures if the photographer gets creative enough. I even have a picture hanging on a wall in my home that shows a waterfall of only four feet high. I put my camera on one of those little pocket tripods and got a very wet knee, shoulder, and hair taking that picture, and remember laughing at the contortions I was assuming to keep from getting too wet in that cold water. Now that would have been a good picture. But, as I wrote, water is fun to photograph and getting wet on occasion is worth the final picture I suppose. Someday I might get the chance to travel around British Columbia, or North America to photograph some of the magnificent waterfalls, but until then I’ll just make the ten-minute drive up the road.

And I always appreciate your comments.

2 responses to “Photographing a Waterfall”