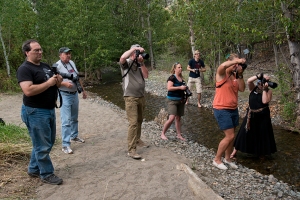 Last weekend fifteen dedicated, and I think, pretty excited, photographers attended the Versatile Studio’s photography open house just outside of Kamloops, British Columbia. It is aptly named Versatile Studio because it provides multiple locations for portrait photography inside and out.

The day began with coffee and numerous discussions on portrait photography. At one point I got up to refill my coffee and then stood back, realizing this group of photographers, with their many different styles and approaches was going to make the day interesting, educational, and a lot of fun.

Of course, it immediately began with a hitch, as only one (thank you, Ali) of the four models that promised to appear showed up; nevertheless, these relentless photographers didn’t miss a beat, and decided to split into three informal groups using each other as subjects.

Those that wanted to work with lights in the large studio space chose two of their number with the most experience in studio strobe lighting to lead, and they took turns modeling, moving lights, backgrounds, etc, and making pictures that delved into some interesting experimentation.

Several others picked up reflectors and gathered at the stream with the one model, Ali. The light filtering through the trees was perfect for the large reflectors, and I think wading in the cool running water was also enticing on the hot August day.

A few decided to try out the light-diffusion panels I had set up in the meadow behind the studio, and later made portraits using the portable strobe I had placed in what was once a large farm equipment/hay storage shed.

Small groups interacted, gathering to discuss different techniques and to exchange thoughts on photography, and in my opinion, it was that exchange of personal experience between the photographers that made the day a success.

As I got the chance to peak at the LCD of several photographers’ cameras, I was intrigued at how differently each photographer captured the same subject. As I write I think of some famous quotes, the first by iconic photographer Ansel Adams, “Photography, as a powerful medium of expression and communications, offers an infinite variety of perception, interpretation and execution.”   His words more than fit what I saw created by those assembled at Versatile Studio that day, and I also like this quote, by author Peter Bunnel, who in his book, “Creative Camera International” writes, “There is no single form or style of portraiture. Portraiture means individualism and as such means diversity, self-expression, private point of view. The most successful images seem to be those which exist on several planes at once and which reflect the fantasy and understanding of many.”

So of course, you can understand why I would include that quote because, indeed, I saw many styles of portraits being made on that day. That’s the interesting and enjoyable thing about getting together with other photographers, especially a collection of photographers as large and diverse in talent and experience as was there; everyone is an individual and creates from their own personal perspective.

Versatile Studio, situated in the small community about fifteen minutes from my shop in Kamloops, hosted this photographer’s event with the help of accomplished photographer, Gary Risdale and myself. Our roles weren’t that of instructors as much as we were there to introduce, demonstrate, and facilitate.

I was so involved with what others were doing that, other than the images I have posted, I didn’t get a chance for anything else.

The studio’s owner, Dave Monsees, commented to me that he liked being around fun people with a true passion for photography and said he enjoyed himself so much that he intends to try to have photographer and model get-togethers like this in his studio on an occasional basis, every month or so.

I enjoyed spending time with those photographers; some were long time friends, and some were new acquaintances; and, I must admit, some of my most favorite times of all, have been either doing photography, or being with people that are doing photography.

It is always great to have your comments, John