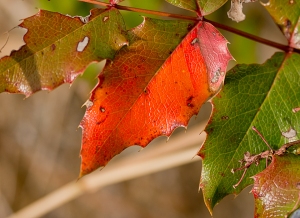 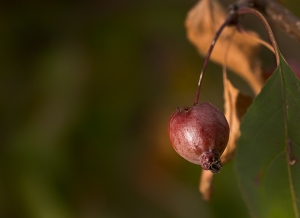 In spite of the chokingly thick, monochromatic, overpowering smoke that is pushing it’s way up from California, Oregon and Washington I can still see that the colours are changing with the coming of fall here in BC.

It has been so hot and dry for the last month that most of the plants are looking rather water starved. I decided this morning was the time to take my camera out in the garden before everything changes again. The first day of Fall is Tuesday September 22nd.

I grabbed my camera, mounted my 70-180mm macro lens on it, placed an off-camera flash trigger on top and put my flash in my jacket pocket.

Even with the murky grey haze there was enough sunlight hacking it’s way through to take pictures without my having to increase my camera’s ISO over 400.

I usually like to have a tripod and even a stand for my light, but this time I thought a leisurely stroll around the yard would be fun.

The Fall garden is so different to photograph than the Spring garden. Spring is so easy with its fresh deep colours and new growth that leaves nothing to the imagination, whereas the Fall garden demands so much of a photographer’s imagination.

It’s the colour and shape that I look for.   Well… maybe more the shape.

English Renaissance statesman and philosopher Sir Francis Bacon wrote, “There ought to be gardens for all months in the year, in which, severally, things of beauty may be then in season.”

I like that quote, His words fit in with how I see my garden. It always is, in every season, a place that I like to walk through and photograph.

Sometimes I get out my backdrop, tripod, lights and lightstands. But this time I just wanted to see what I could find. It had been a lazy morning and I suppose I wasn’t as serious about getting creative images, and I know hand holding a camera for macro photos rarely produces images as sharp as when one uses a tripod. Nevertheless, I thought I should at least photograph some of the yellow leaves and as long as I could keep my shutterspeed up I would reduce camera shake.

I had been working in my garden for the last several days and kept thinking that I should spend some time with my camera. I actually haven’t been working “on my garden” just in it. I have the first 20 of about 30 boards on sawhorses that I brushed sealer brushed on. I decided this would be the summer to put a roof on the last part of my deck. I cut down a couple trees to use as posts and built the roof, now I just have the 14X14 foot ceiling to finish. Then I will be able to sit comfortably rain or shine and enjoy the cool Autumn days.

The days are changing fast and this may be the last chance I get to photograph the garden before its next seasonal change. The weather report predicted much needed rain and as I write I think I can hear it starting, and if it keeps up most of the night I think it might be worth my time to go out with my camera again in the morning. There is always another opportunity for photos in that ever-changing garden. 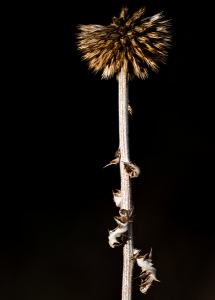 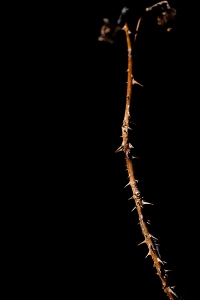 I try to wander about in our garden with my camera each and every time the season changes; spring, summer, fall and winter.

I have photographed the changing garden throughout the years and, although it always seems very familiar and comforting, I find myself discovering different ways to capture the life that begins, grows, blossoms and then retreats into sleep. There are times when I have constructed elaborate sets with reflectors to capture and control the light. I have built mini studios much like the controlled indoor setups that portrait photographers are familiar with. I’ve lain in the snow and employed umbrellas on rainy days. However, on this particular day I wanted light, and waited all day for sunlight that seemed reluctant to bring me one day of fall warmth I wanted to photograph before the snow that was predicted in a day or two.

When 3pm rolled around I worried that if I didn’t get something done in the quickly dropping light, other than look out the window, I wouldn’t get any pictures at all.

My camera was waiting with a manual 200mm macro, wireless sender and two light stands with a flash and umbrella mounted on each. However, when I finally walked outside (yep, I already said “quickly dropping light) I realised I was doomed to failure if I relied on taking the time to set up that equipment.

Years ago I was asked to give a lecture to the Abbotsford Photo Arts Club. I won’t go into that long discussion, but the title I chose was, “A problem solving approach to photography”. And I realised that this was the time to move into a problem-solving mode.

I removed the 200mm macro from my camera and replaced it with my wife’s 70-180mm macro. I prefer my old manual lens for close up photography, but that Auto focus zoom macro is really easy to use.

I also put aside the light stands and attached a single flash to an eight-foot TTL flash cord. I could have set things up wireless, but I was going for quick and easy and with the TTL cord I just let the flash hang off my shoulder until I wanted it.

I could have used a high ISO, a wide aperture, and just popped a bit of light for a proper exposure. But a high ISO would increase the ambient light and show the lifeless colours of surrounding foliage. A wide aperture would limit my depth of field, and TTL is fast and easy to light, compose and relight a subject.

I under-exposed my exposure by several stops, and let the dedicated TTL flash (with a diffusor cup) do what it was designed for, to deliver just the right amount of light on my subject.   That gave me a dark background that I could later make completely black by adjusting the contrast in Photoshop.

I didn’t have a lot of time before more clouds moved in making an already dark afternoon even darker, but my portable set-up made things easy and even gave me a moment to pause and watch our three legged, feral cat flee as it ran out from the cover of the shrubbery. Gosh, in spite of the damage to her one back leg, she sure can move.

I had been trying for three days to get some pictures, but unpleasant weather and life in general got in the way. However, with a bit of problem solving and the will to finally get out and do something, a person can end up with a few photographs worth keeping.