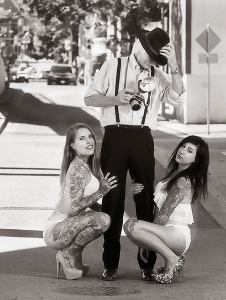 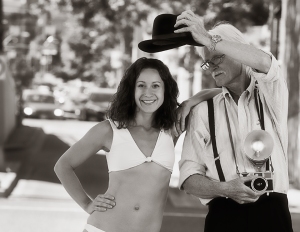 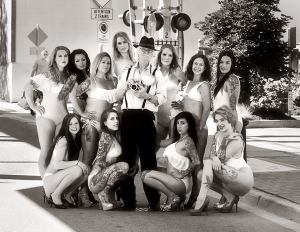 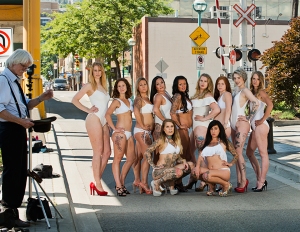 Photographer Jo McAvany’s loose goal was to create a visual contradiction (artists might call it a “juxtaposition”) that discussed a time when early photographers wandered cities documenting scenes of urban life for weekly newspapers and the modern era for women that gained momentum in the late 1950s and early 1960s.

Jo wanted that look one might see newspaper reporters/photographers wearing in those early black and white movies. The fedora, a pinstriped shirt with rolled up sleeves, suspenders and an early 1940s 35mm film camera.

She came up with the white swimsuits after seeing a picture of Hugh Heffner surrounded by Playboy magazine playmates. When she sent me the picture my comment was “the robe?” She said, “no your Heff look.” I wasn’t sure about that, but I did like her idea about the 50s.

She chose to have women wearing white swimsuits to represent the modern era that was propelled, or at least gained momentum in the late 1950s, in part, do to Heffner’s magazine.

Jo put the call out and immediately had 14 or 15 replies. We had eleven at 9AM on the day of our shoot. I had no doubt that Jo could control and pose all those women. For my part, all I had to do was stand there, as a prop for them to pose against.

My main concern was the lighting. As regular readers know, I don’t much like flat, uncontrollable natural light. I brought two speedlights on stands with 40”umbrellas and asked my friend Drew Vye to assist with the lights when I was detained as a model.

The biggest problem was the bright morning light and clear blue sky. I quickly realized the speedlights weren’t powerful enough to balance the painful light at the first location. Drew, Jo and I started wandering, and after yelling back and forth down the sidewalk we chose the middle of the street location.

We would need to move when some car came through, but it was early and during the two hours we were there only one car angrily honked. Most drivers were amused to see all the attractive women in swimsuits and drove by smiling and waving.

The changing light from there wasn’t that much of a problem. Drew and I just kept moving the lights so there wouldn’t be ugly shadows and make sure Jo’s subjects had depth and were separated from the background.

The street location couldn’t have been better place to show the city. And when Jo used the 70-200mm the perspective was excellent.

I know the women all had fun. We even had them pose in front of a nearby restaurant with the reluctant manager that I dragged out. Oh, and when I suggested that they pose with Drew they all hooted and waved him over. He now wants enough prints to send to every relative he has in Canada.

As I stood in the street holding that old camera and tipping the brim of my hat down I thought about a press photographer from New York’s 1940s named Weegee, known for his stark, black and white photographs of urban life and hoped Jo would capture some of that feeling.

A photographer can make all kinds of statements. Jo’s visual discussion is about the changing times we live in and, in my opinion, how photographers have been playing an important role documenting those changes.

4 responses to “A photographic discussion.     ”