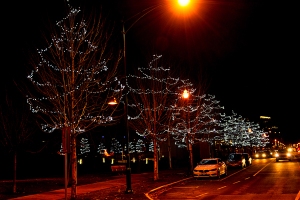 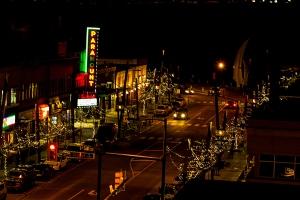 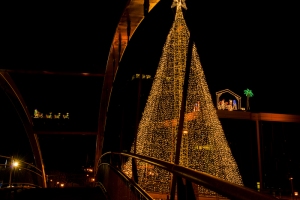 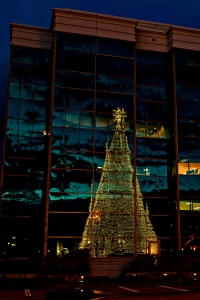 When I was a child my parents used to bundle my brothers and I into the family car and drive up along the high avenues around Salt Lake City so we could look down on all the decorative lights in the valley. And we even got hot chocolate, so needless to say I am a Christmas light junky.

For years I have had business in Kelowna, British Columbia during December and I always brought my camera so I could go out at night and then again at morning’s first light to photograph the Christmas lights along the city streets.

This year I had to come down much earlier, on the last day of November. It was an early day for me and I finished just before lunch, so I wandered around looking through the store windows near my hotel until It had started to rain, no not the snow I was hoping for, but I had hours to wait till sundown so I went into an eatery called the Memphis Blues.  When I entered the place was filled with wonderfully loud southern blues music. I was delighted to find they had the perfect food for a damp cool day, southern barbecued chicken. Gosh, I am sure somewhere it might get better than that, but to me it was the perfect place to pass the time till evening and could photograph the bright Christmas lights in the city.  In spite of the rain, when I finished I decided to wander a bit with my camera for some low light afternoon photos. The last light of the day is always interesting, even on a drizzling over cast day.

Last year I photographed decorated boats moored along the lake harbor and people skating on the outdoor rink. However, to my dismay the barkeep gave me the bad news that the Kelowna winter light festival was days away and it was too warm to use the skating rink. Gosh, I might just be forced to make the winding two-hour drive again in a few weeks. Blast my bad luck.

I snapped a few from my hotel room. My room was on the 5th floor above the street so I had an excellent shot with my 70-200mm down the street towards the lake and after that I meandered along the street and beside the lake making photographs. There weren’t a lot of people, but those I did pass must have already been in a holiday mood because every person either smiled and nodded or said hello. Maybe they just liked seeing an old grey haired guy enjoying himself taking pictures of the city they lived in.

The cold wind coming off the lake finally worked it’s way in and I decided to return to my hotel room to warm up till night fall.

By 7PM the light had gone down. I began by again taking a photograph down the street toward the lake, then grabbed my tripod and camera and went out for another ‘bout with the lake’s cold wind. I photographed many of the same things I had in the afternoon light, except this time the Christmas lights were sparkling in the dark sky.

Sun-up is at 7:30 here in southern British Columbia. I like the light just before that when I am photographing city lights. I want just enough to give the feeling of nighttime without covering building details.

There I was waiting at 6:30 in the cold morning air, and by 7ish I was sadly done. I always have to tear myself away. When I was back at my hotel some time later drinking coffee and having my morning yogurt I got a text from my friend Dave. He wondered how it was going and I replied that standing alone at 6:30 AM on a cold, windy, dark deserted overpass with frozen fingers while taking pictures of street lights is damned enjoyable, Gosh, it doesn’t get much better than that. The only thing that could have made it better was if it started snowing.

Night photography (well actually, early morning photography) gives a city such a nice mood that isn’t really manifest during the day. I like the mystery and, of course, this time of year the frosting on the cake is the wonderful Christmas lights.

9 responses to “I have always liked Christmas lights.   ”