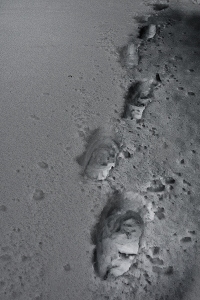 A phone call at 3:30 in the morning is never good.  And sure enough the call I got last Monday morning met my worst expectations.

As I answered the phone I wondered, “Is this a call about a fire or a break-in”. Sure enough it was the latter. There was a break-in at my store.

Somehow three thieves gained entry into the main building from the alley door, and as the alarm blared, they made their way towards my storefront shop. Thereafter, they easily smashed the glass of the door entering my camera store, rushed to a display cabinet containing cameras and lenses; and because I found some lenses scattered on the floor, I think they rudely shoved equipment from two shelves into a camera case that contained my digital projector, and then ran back through the building to exit the rear door.

The tenant that resides on the second floor added her 911 call to the notification the security company was getting from the alarm, and looking through her window watched the burglars making off though the falling snow. Fortunately, the police arrived very soon after and using their tracking dogs easily followed the criminals to their hideout and apprehended them.

I give credit to the fast work of the local RCMP. They were certainly aided by the freshly fallen snow that at that time in the morning revealed the tracks of those thieves that entered and exited my shop. I would like to have watched those Mounties with their dogs chasing down the bad guys.

As I child of the 1950s radio shows like, “The Lone Ranger” and “The Green Hornet”, I listened with excitement as Sgt. Preston of the North West Mounted Police, and his dog, Yukon King, fought evildoers in the Northern Canadian wilderness.

I don’t want to make light of the excellent police force we have here in Kamloops, but as I stood outside the back door in the eerie, 4am light talking to the woman from the upstairs apartment I looked down the snow covered landscape and thought of that radio program of my childhood days from all those years ago. I cannot say the reason. Perhaps it was the lack of sleep, or the stress of the break-in, but when she mentioned the police and their dogs following the tracks in the snow, that’s what came to mind.

I received a call from a constable regarding the photography equipment stolen from my shop, who told me they recovered cameras and lenses in a black case. I assume that’s the missing projector case.

There is a good chance that most of, or hopefully all, of my property will be returned. Now I just have to wait for the lead inspector to determine how long they need to keep things as evidence. After posting the incident on Facebook, I received lots of concern from local photographers. That was nice. I found it interesting when someone would write, “You must feel violated”. For me that isn’t the word I would use. “Irritated” was a much better word to fit my mood as I cleaned up the glass, covered the opening with wood, and now must wait for the police to return my camera equipment.

I will get through this incident, survive my disappointment, and today returned to selling good, used, photography equipment, but now I also have a story to tell of yet another of those stressful events. There are so many photographers out there that have, as me, been photography equipment and have lost their prized photography equipment to, as one officer I talked to called them, “rats that scurry around in the darkness looking for an opportunity”. As I am sure readers know, we must be vigilant against thieves.

As I write this I remember how Sgt. Preston would hug his dog at the end of each episode and say, “Well, King, it looks like this case is closed.”

Thank you to the Royal Canadian Mounted Police for helping me recover my merchandise.