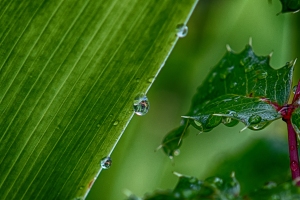 What does a photographer do on a rainy day?  This photographer’s options don’t include getting his clothes and equipment wet. When the rain outside has filled the paths with puddles I try to fine momentary instances when the sky lightens up for some shooting and then creating with Photoshop.

After two hot and dry summer months dark clouds rolled in seemingly out of nowhere and the rain came down. The damp, cool, afternoon breeze was a nice refreshing change, but I had just set my camera bag and tripod on the porch and was planning to make an afternoon drive to a local waterfall when it began to pour. Well, that excursion was out.

What does a photographer do? I suppose I could have turned on some music and picked up the unfinished novel I have been trying to get back to. There were some silly movies on the television, and I could have snuggled up on the couch and watched one or two, or (and I liked this one the least) I could have pushed my way into my messy workshop to continue the never-ending job of cleaning up. However, none of those seemed all that interesting as I stood looking at the rain falling on the garden out the front door.

Fortunately for me the rain wasn’t hard and constant. It would come and go, leaving spaces of time for clearing, with moments of sun poking through the clouds. So during some clear moments, I mounted a macro lens on my camera, grabbed my tripod and went outside.

I looked for interesting plants with raindrops to photograph until the rain began again, then I’d go back inside and wait for the next lull in the rain, however, I then had image files that I could download to my computer. And while I waited to go out again I could sit and creatively work with the pictures I just captured.

I spent the afternoon that way, I’d go out when the rain lightened up, wander around the yard and photograph anything with water drops that caught my eye, return to the house when the rain returned and work on those image files till I could go out again. I snacked, had a couple glasses of wine, and spent a great afternoon with photography. What could be better than that?

There is always something in the garden no matter the weather, sun, snow or, like on that enjoyable day, intermittent rain. The slight overcast day was perfect for my subjects. Bright sun will increase a subject’s contrast making it hard to capture details in the extremes, and I wanted to hold on to what details I could. The diffused daylight reduced the number of f/stops from black to white.

I used two different lenses, a 200mm macro lens and a 70-180mm macro. I wasn’t after anything in particular so I just changed lenses depending on my mood. I positioned a reflector sometimes, used a wireless, off-camera flash mounted on a light stand for others, and neither when the sun really came out.

I suppose I am a bit of an opportunist and I regularly can be seen wandering around the yard and neighborhood with my camera in search of nothing in particular.  I just like taking pictures rain or shine.

About getting out there with a camera the famous French photographer Jacques-Henri Lartigue said it best, “It’s marvelous, marvelous! Nothing will ever be as much fun. I’m going to photograph everything, everything!”               I am in complete agreement, how about you?

I look forward to your comments. Thanks, John

8 responses to “Rainy day photography – Why not?”